Russian forces have captured the city of Rubizhne while Ukrainian forces are moving additional reinforcements to the area of Siverskyi Donets.

Belarus continues to move its forces to the border with Ukraine. Situation in Transnistria remains unchanged. 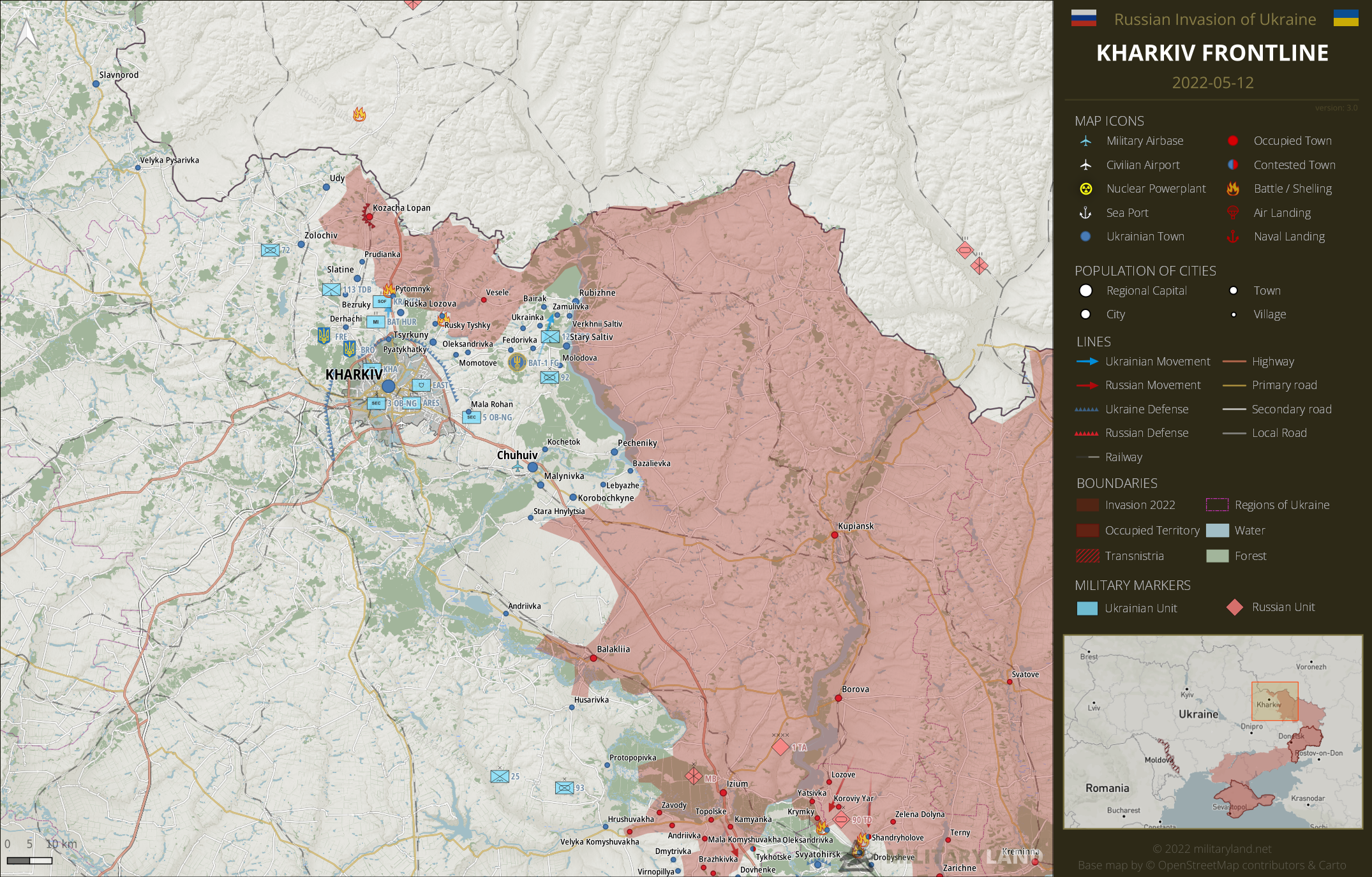 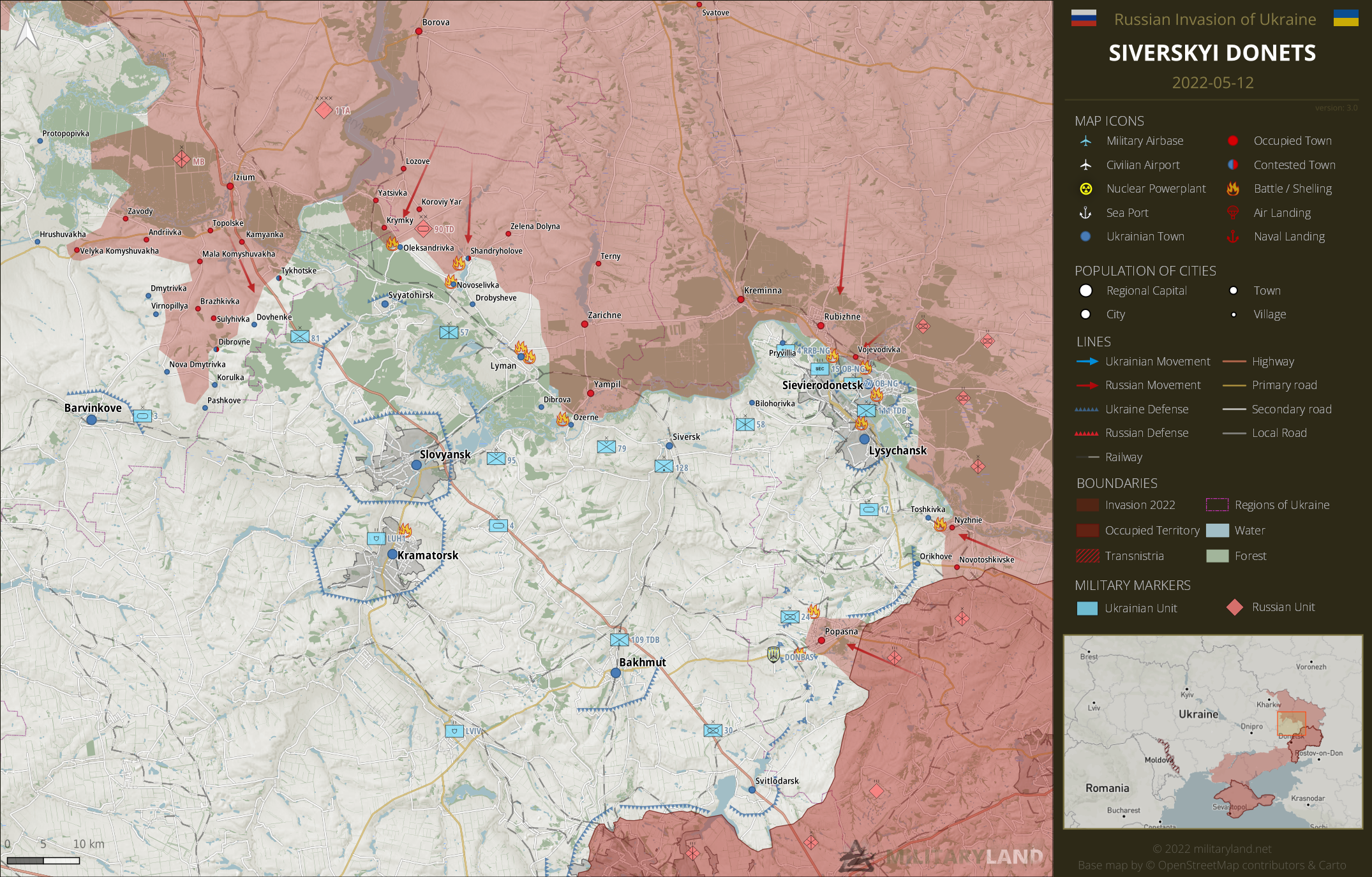 Russian troops attempted to break through Ukrainian lines in the area of Novoselivka, but the attack was repulsed. Fighting continues in the vicinity of Oleksandrivka and Shandryholove.

Some elements of 58th Mechanized Brigade have been redeployed from Sumy Oblast to support Ukrainian units stationed in this the area. 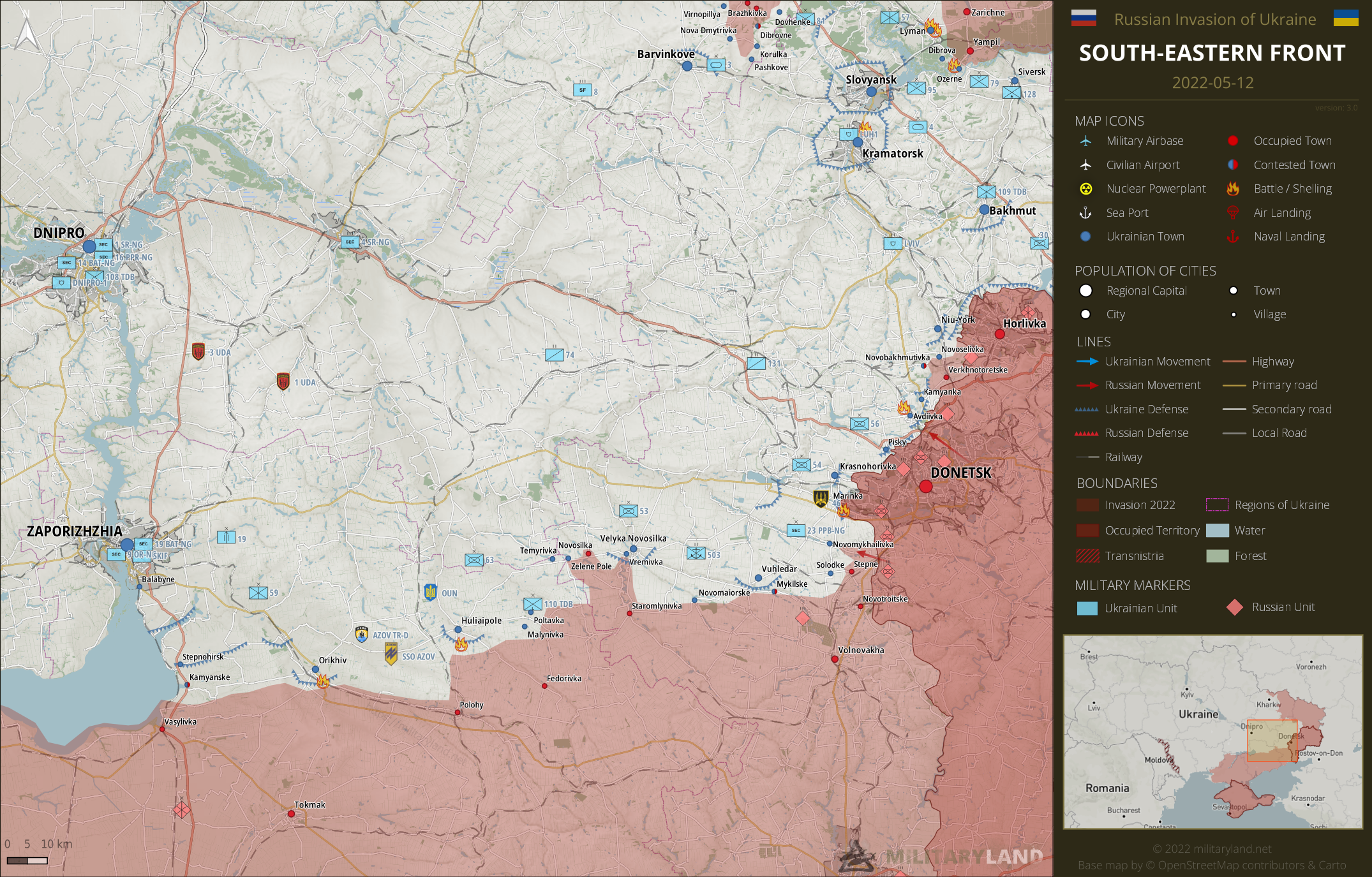 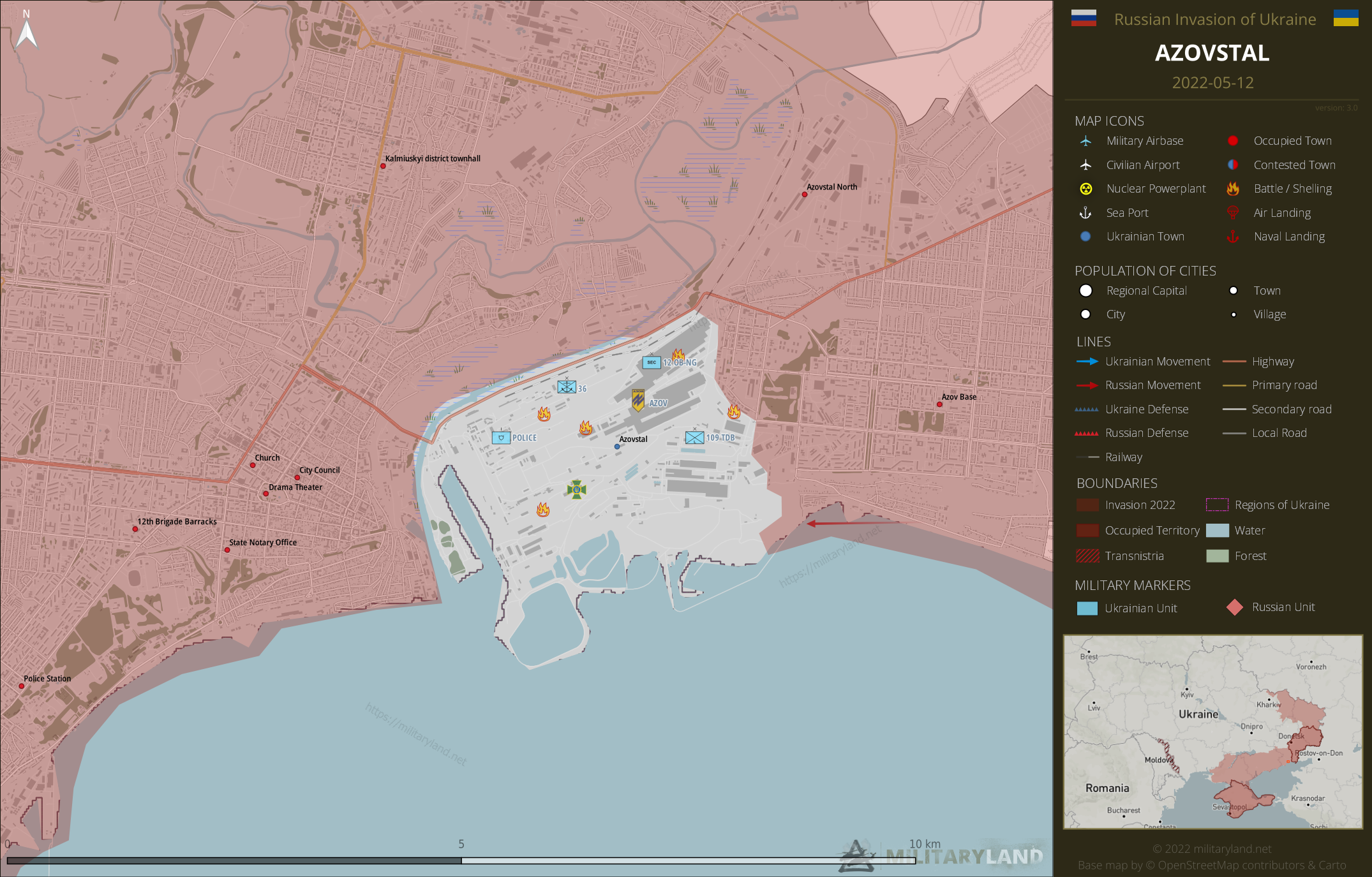 Russian forces broke into the Azovstal plant and captured a few buildings on the edge. Ukrainian troops managed to push the enemy back in the evening. 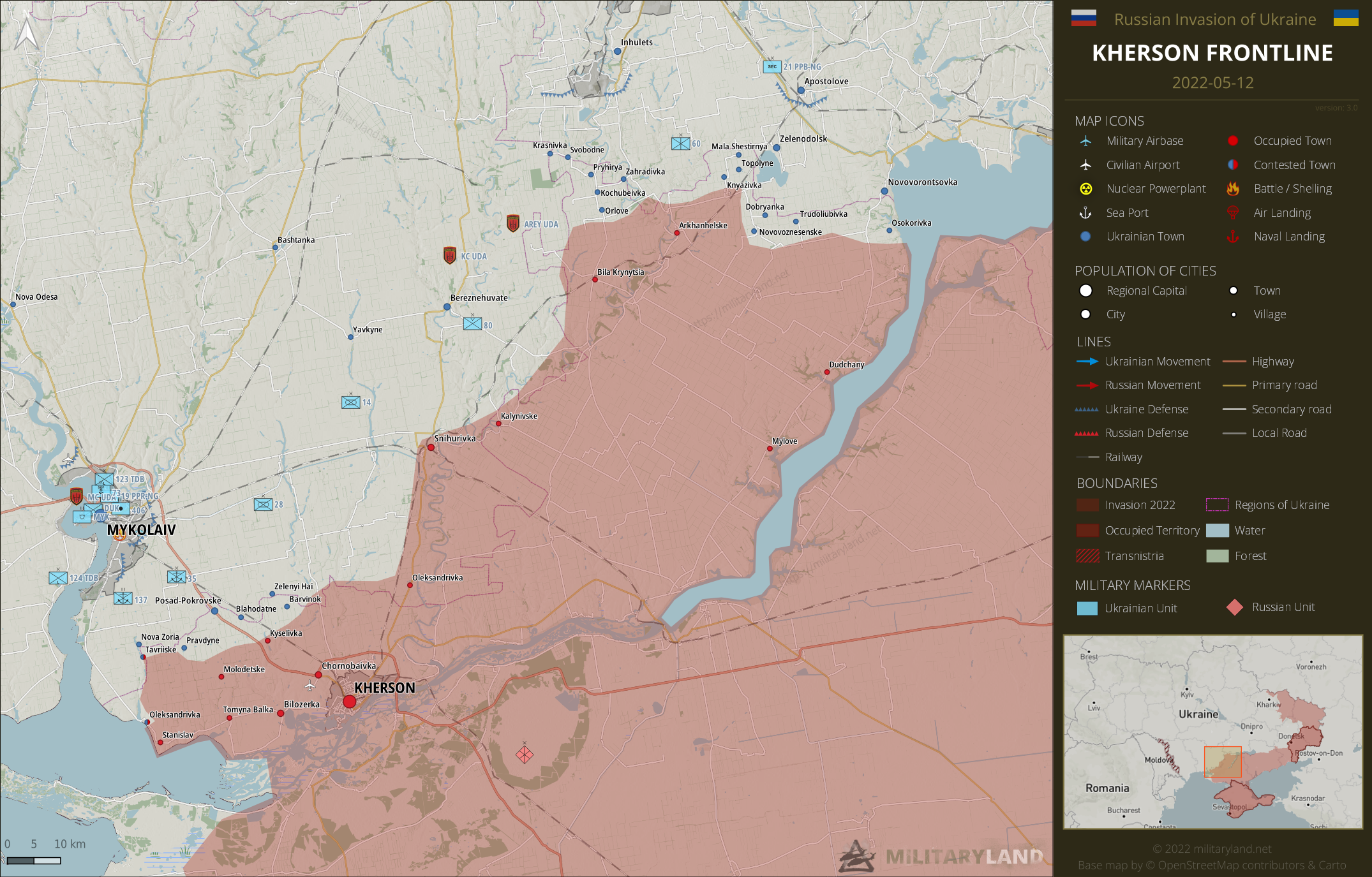 There was no change on the ground in Kherson Oblast. Heavy fighting is reportedly ongoing on the regional border of Kherson and Mykolaiv Oblast. 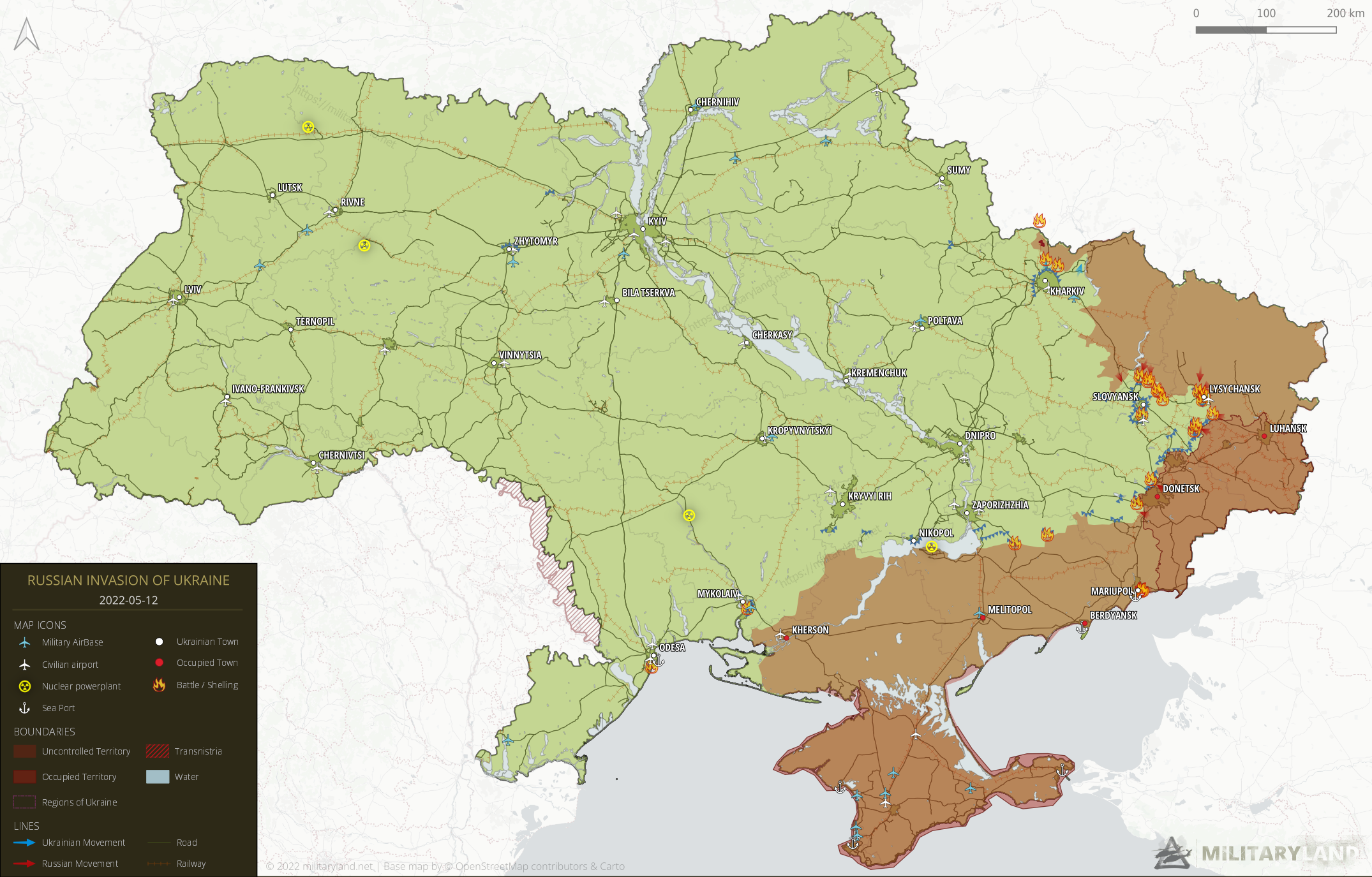 What if Ukraine lose and What if Russia lose,it something for people in Russia and Ukraine to punder, do people have a plan b, because the loser,will lose big

if Ukraine lose, he would lost the territory of the industrial zone, and lost the basic conditions for joining NATO and the European Union. It’s hard to imagine what would happen if Russia lost. He could drop a nuclear bomb on Odessa for immediate victory, possibly prompting Zelensky’s immediate surrender. Or target his nuclear bombs to Finland to deter the West and stop all aid immediately. Or target Britain or his ultimate enemy, the United States. In mutual destruction, Russia will survive because of its vast territory, and America will enter the history books.

I pointed out a risk, and obviously we all hope it doesn’t happen. It should be noted that in the face of nuclear bombs, people or troops are all pieces of paper that can be burned.

Putin has not given up his ambition of capturing Kiev,he intend to take the middle route, toward Kiev ,by way of the Dnipro River,one bite at time

Can you make a distinction between ‘Russian forces’ and Donbas/Luhansk militias? From your notes it’s difficult to ascertain who is actually doing the fighting.

There is no difference.

These are the same forces and always have been.

I read on some Serbian papers “sorry for English” https://www.vostok.rs/index.php?option=btg_novosti&catnovosti=7&idnovost=136631&Pusilin:-Ukrajinske-snage-u-oblasti-Avdejevke-u-operativnom-okruzenju

It is too early to say that the forces of the Donetsk People’s Republic took the OSU (Ukranian Army) group to the boiler “surroundings” in the Avdeyevka area, but Ukrainian units have already lost their freedom of movement, DNR President Denis Pushilin told Channel One.

“We can talk about the operational environment, that is, about fixing all important points of ammunition supply and blocking the possibility of enemy rotations.” “Speaking of the large full-fledged boiler around Avdejevka, we cannot say that in advance,” he explained.

There’s no confirmation from Ukrainian officials about retreating from Rubizhne.

I not fan of Paul,but the US got burnt by Aghanistan stealing billion of dollars,putting nonexistent people in the payroll,he just asking for auditor,unless Ukraine like corruption,the money do not bother ,but their should be over sight of the distribution of the fund

Well, I guess it’s better if more money will go actually to Ukraine and not to someone’s pockets. One week delay won’t really change much at this point. I just hope that all this won’t go into usual US bureaucratic shit with months of waiting.

Lots of this money will go too defense contractors,in America,this how American use it foreign aid, Ukraine will be lucky to get a tenth through humanitarian aid,hand out by government officials, politician use get campaign contributions from the contractors

Rand Paul is a real piece of garbage. This is not new.

The city of Sievierodonetsk is now the most important fortress on the north bank, which reminds me of the battle of Stalingrad, both of which were urban battles near the river. The Russians would not be foolish enough to storm the city with infantry, but would probably try to encircle Sievierodonetsk by attacking the south bank of the river. Okay, well, attacking the south bank of the river doesn’t look easy either, but the Russians have been trying to get across in recent days and it’s possible that’s what they’re trying to do.

PS ： It’s amazing that one senator can postpone a bill. I used to think the Senate passing a bill only need a majority vote. The process of American politics is really complicated, even difficult to understand.

It was more a case of preventing the bill from being accelerated than delaying it, technically. But the outcome won’t change, it will just take a few more days.

In some cases, however, a minority of Senators can, with enough motivation and stamina, stall a bill indefinitely, even if a majority wants to pass it:
https://en.wikipedia.org/wiki/Filibuster_in_the_United_States_Senate

(The Russian plan for Severodonetsk is probably similar to what they did with Mariupol.)

Americans spent $2 trillion and still lost the war in Afghanistan. So trying to beat Russia for just $40 billion is like a joke.

Technically it was not the war that was lost in Afghanistan. Americans lost a dream to turn Afghanistan into a democracy. Situation in Ukraine is the opposite. The West want to protect an existing democracy, not to establish a new one. This why they win.

The ultimate goal of the Americans maintaining troops in Afghanistan is to control Central Asia and then Eurasia. Democracy is just one of the means by which he controls Afghanistan, just as he has used democracy as an excuse to subvert the regimes of other countries. If you believe that it entered Ukraine for democracy, then you cannot explain that the United States waged 13 foreign wars after World War II and maintained a close relationship with Saudi Arabia for 50 years.

Americans will not support long-term wars that have little to do with them. and purely from a military point of view, America will be doomed to fail, just as he did in Korea, Vietnam, Iraq, Syria, Afghanistan.

We had a 380 billion budget surplus in April, Google US April 2020 Budget Surplus

The thing is, they arent winning, the donbas frontline is already faltering

Very convincing. Please invest $300 billion to support the war in Ukraine. Then, remember to give out 10 billion dollars to the homeless on the street, and the rest can be used to subsidize the poor people in the United States who are struggling due to inflation.

Ukraine will never see the level of money,we spent on Afghanistan,we are going into an election,an American politican have to answer to voters,they have a 1.7 trillion dollar stimulus bill,it they pass it , would get them lots of votes ,if passed

Plus, other NATO members will likely add $1+ billion a month?

The longer the war lasts, the more oil and gas Russia will earn. as it has happened now. The more the US and EU invest in the Ukraine war, the more they will hurt themselves. And because of inflation, the US will face more and more losses, the economies of some EU countries will collapse, they will resist the US war policy, and the US and Europe will be divided. At this time, you will find that the so-called democracy they claim is just a painted skin on a corpse.

When part of the Republican Party is de facto a Russian asset, many things things can be stalled… remember the infamous “you should do us a favour though”… let’s hope people will realise it before the midterms…

Who says they aren’t influenced directly? That most definitely is not supported. How in the world does the GOP deserve the benefit of the doubt on something like that? They lie as brazenly as Putin’s government.

The GOP is an anti-democracy force in America. Their dalliance with dictators like Putin is not just some fluke.

The GOP is an old dying Party, Trump is more of a useful idiot of Putin,they are mostly anti women and anti minority,but Ukrainian I heard vote for them,America is moving toward a majority minority country,in which minority of all ethnic will make up the majority population of the US Google Ukrainian GOP

Oleksandrivka (near Kherson) appears to be (all the time?) under russian control.

Which Oleksandrivka? There are 109 in total in the Ukraine. https://en.wikipedia.org/wiki/Oleksandrivka

Yesterday, I made a similiar mistake and mistook Bairak in Sumy Oblast for the Bairak in Kharkiv Oblast.