Russian Army have transferred some of its units from Kyiv and Chernihiv Oblasts to Donbas. They will join the operation to capture Donetsk and Luhansk Oblast. Ukrainian Army attempted to evacuate wounded soldiers from Mariupol, without success. 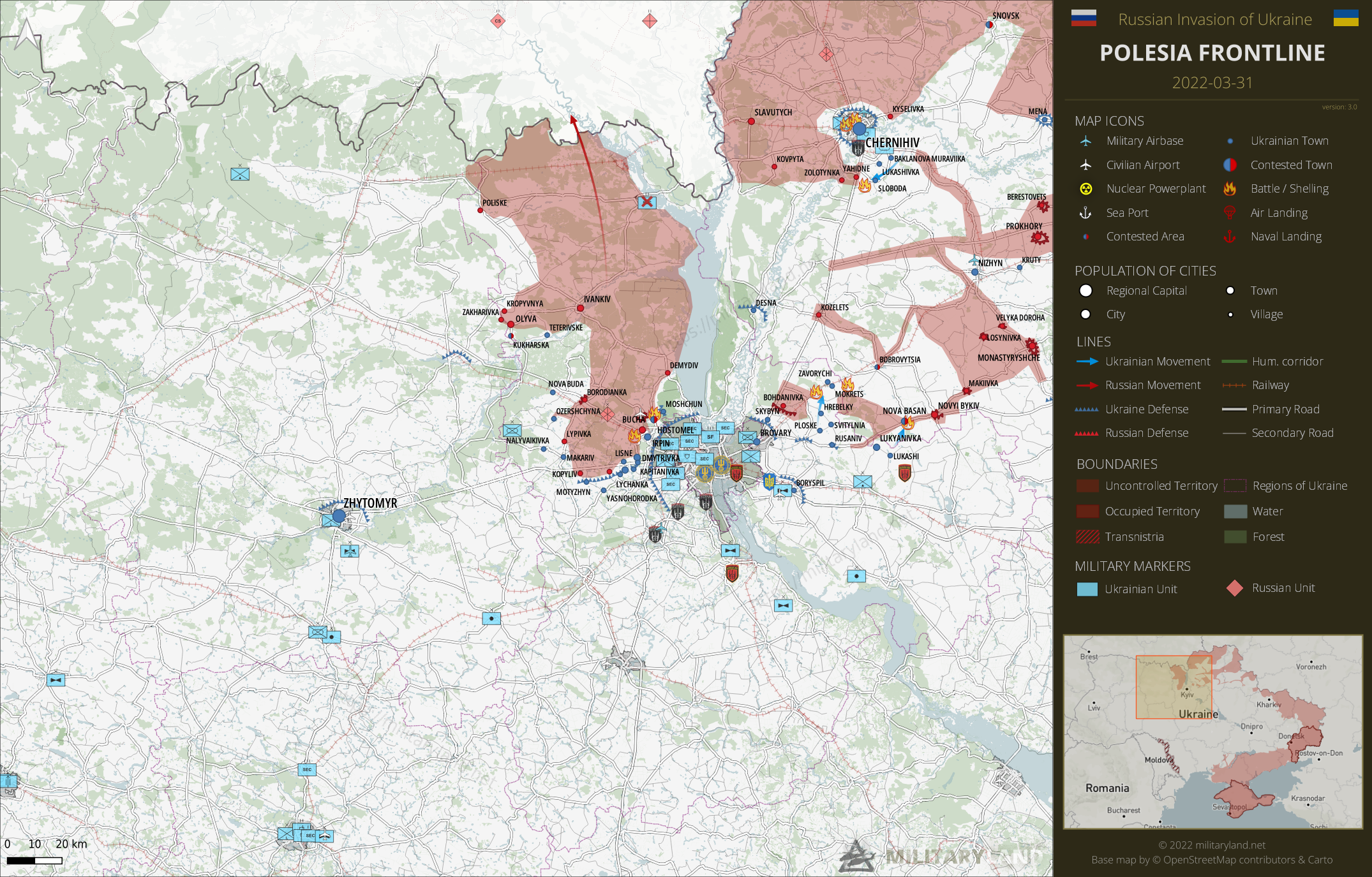 On the western bank of Dnieper, Russian troops have been seen leaving the areas of Bucha, Hostomel, Chornobyl and heading towards the border with Belarus. Ukrainian troops haven’t moved into these areas yet.

On the eastern bank, Ukrainian forces liberated Zavorychi, Mokrets and cut the supply lines for Russian troops stationed in Bohdanivka. 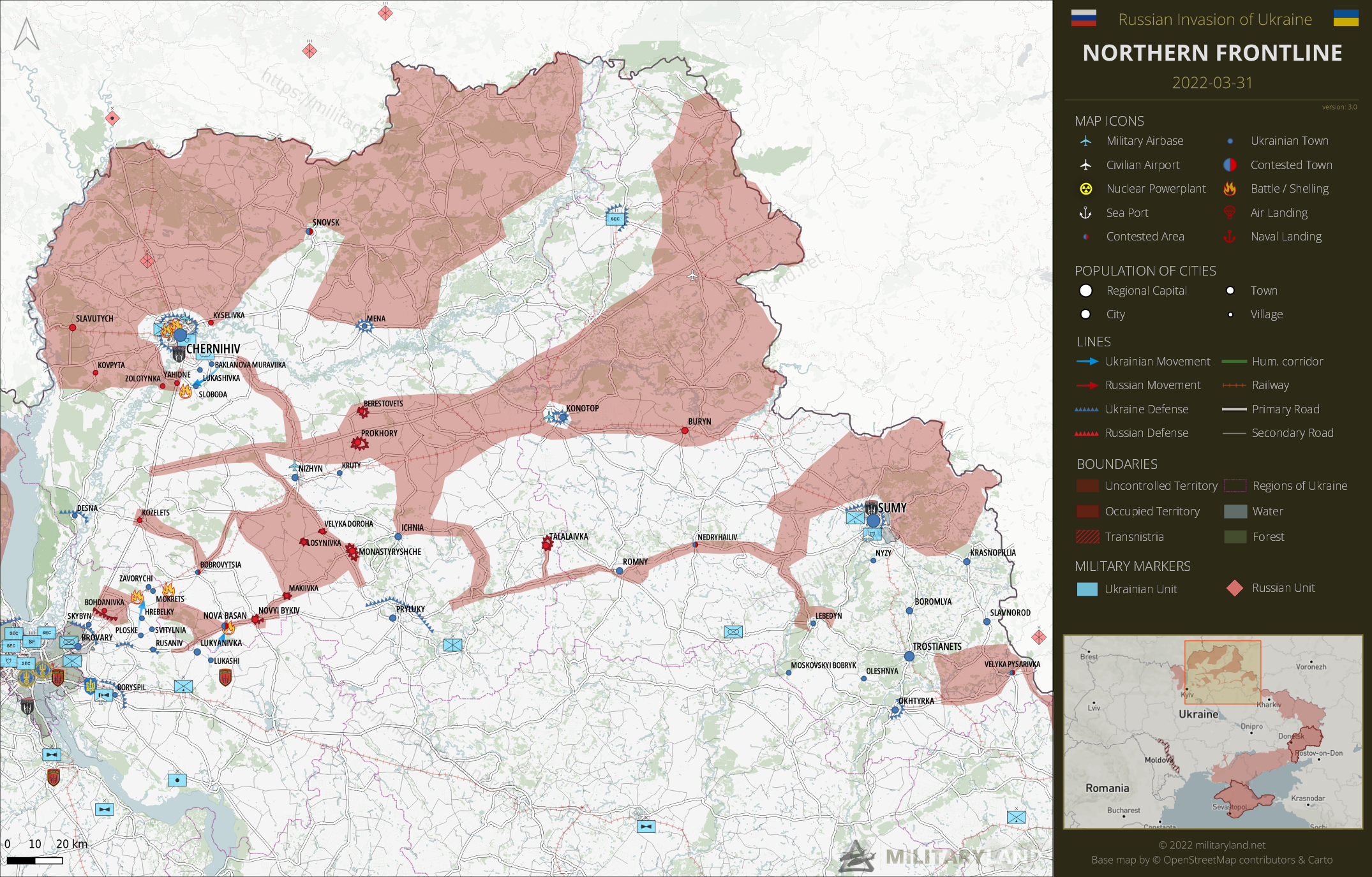 Ukrainian troops liberated Lukashivka and reportedly reached Yahidne. In the south, Ukrainian forces entered Nova Basan. It’s currently unclear if they regained the full control of the town or they control just a portion of it.

There was no change on the ground in Sumy Oblast. 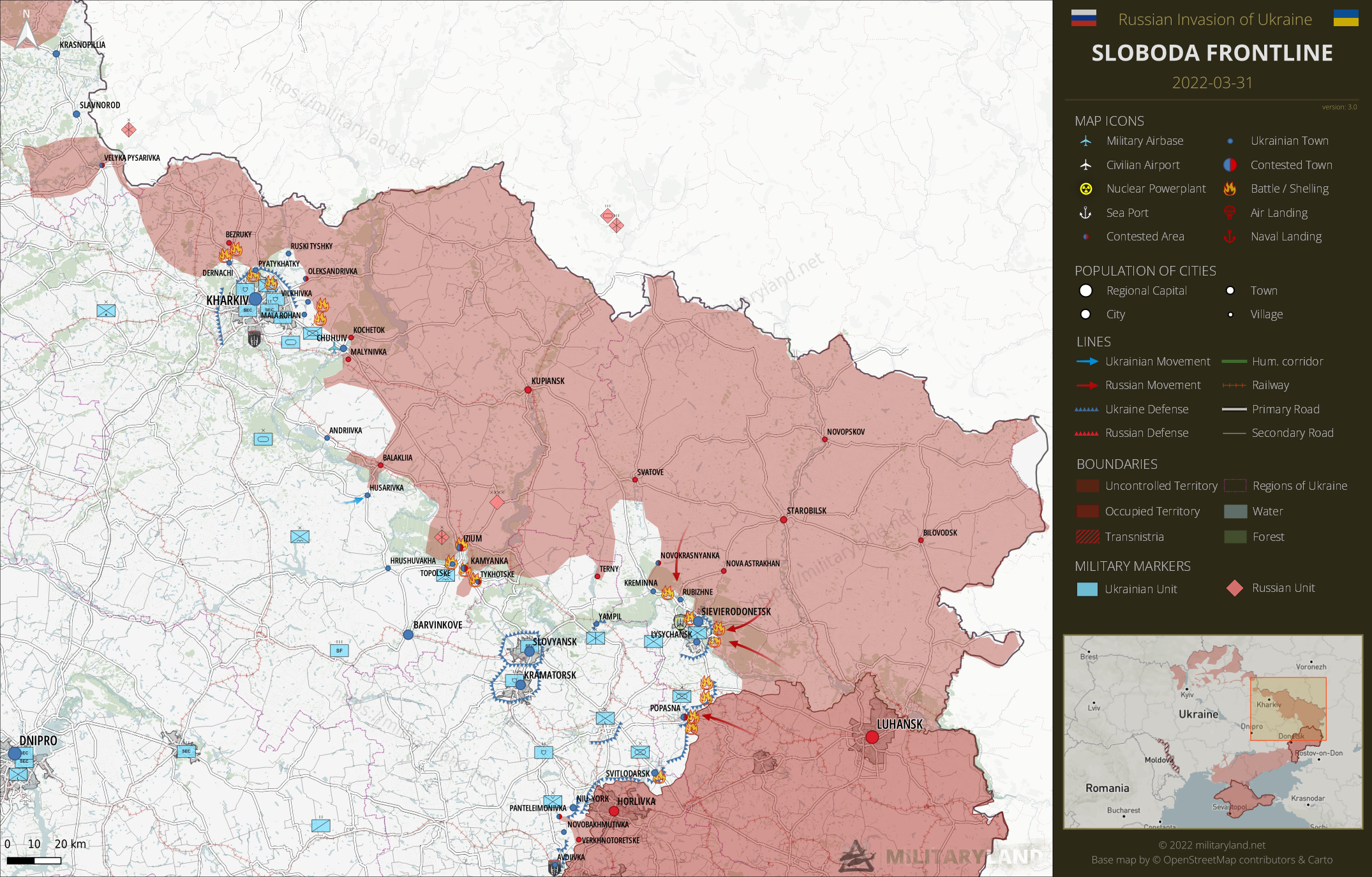 The hottest point remains Izium. Ukrainian forces continue to hold the southern part of the city. Russian troops managed to reach a Ukrainian vehicle graveyard somewhere near Izium and captured at least four BTR-4s and one Triton LAV. The condition of captured vehicles is unclear.

Russian troops captured Terny and have moved towards Yampil. A Russian spearheading element tried to break through Ukrainian lines north of Popasna. The attempt was stopped by Ukrainian defenders. 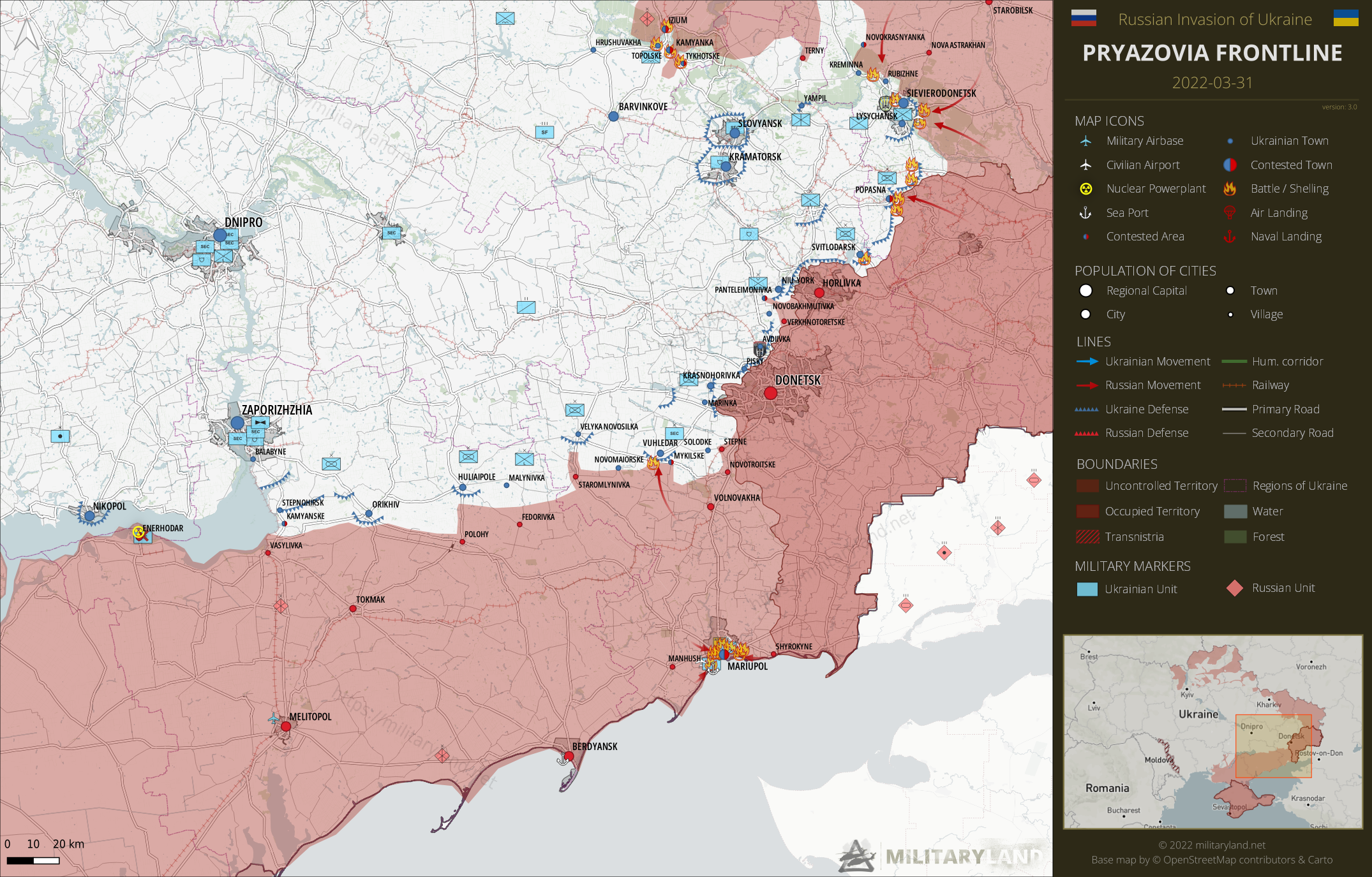 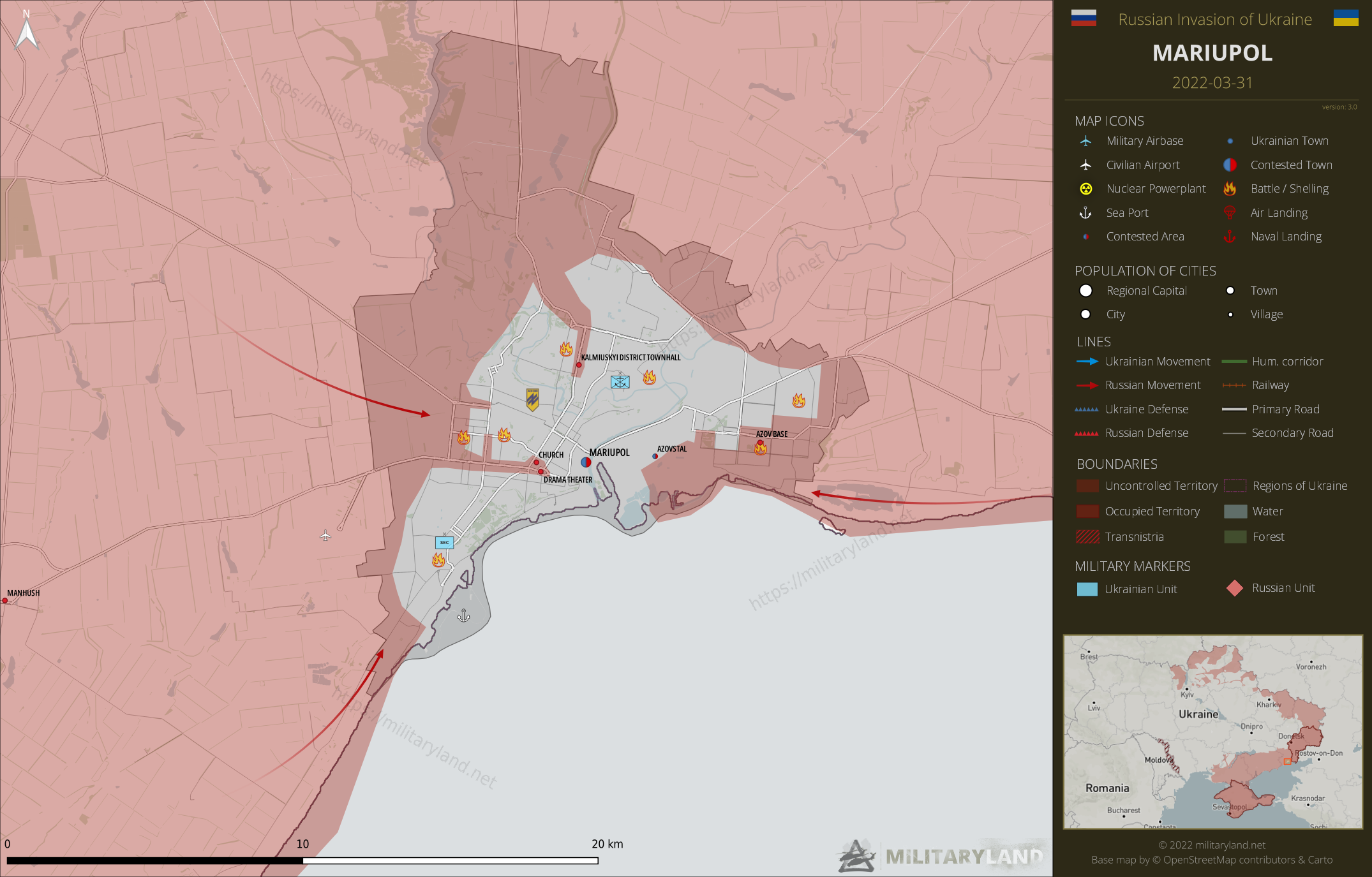 Russian forces downed a Ukrainian Mi-8 helicopter south of Mariupol as the Ukrainian Army attempted to evacuate wounded soldiers from the city. The helicopter made it in, but was downed on the way back. A dozen of Ukrainian soldiers were killed, two made it alive and were captured by Russian troops. 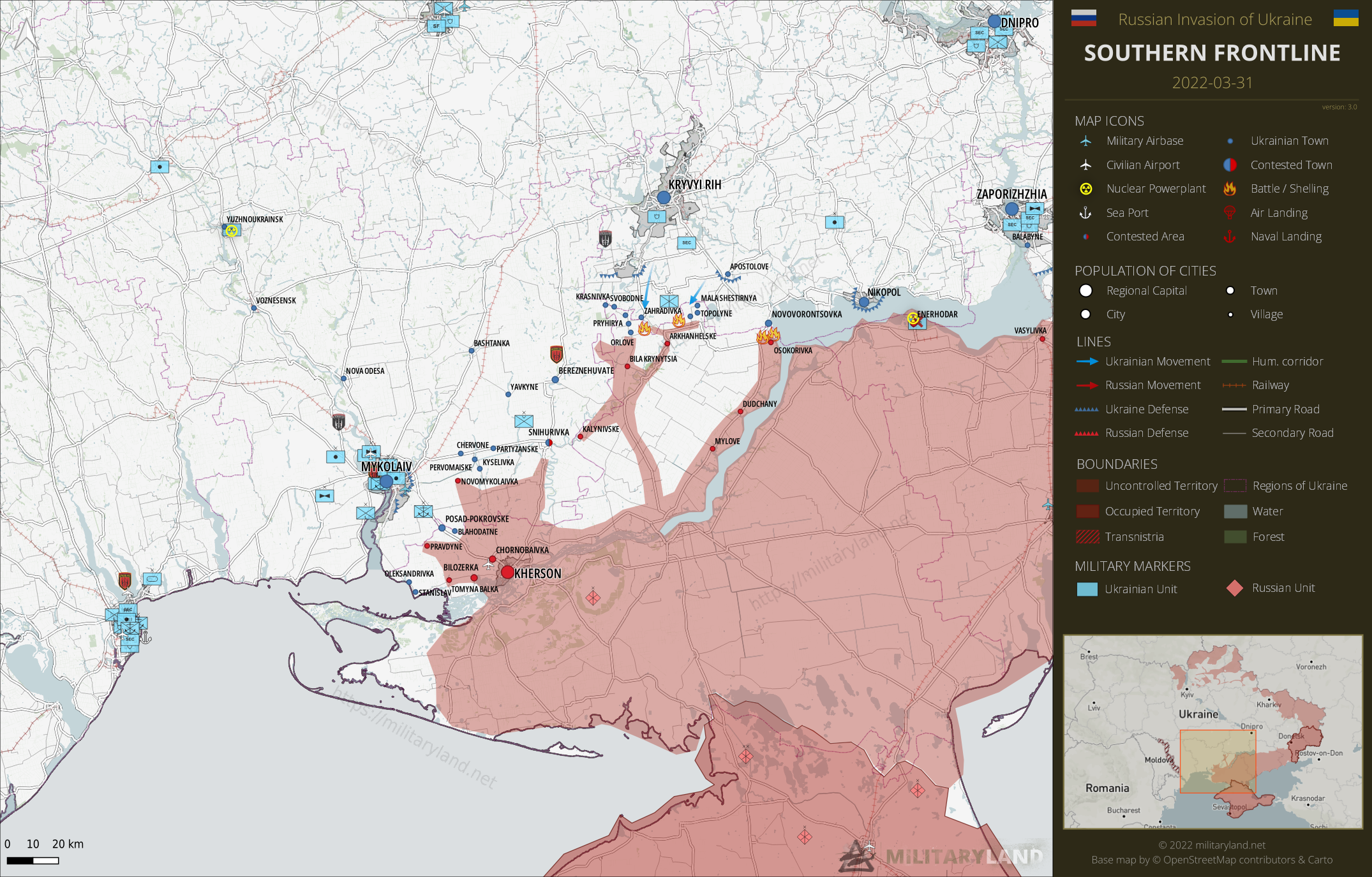 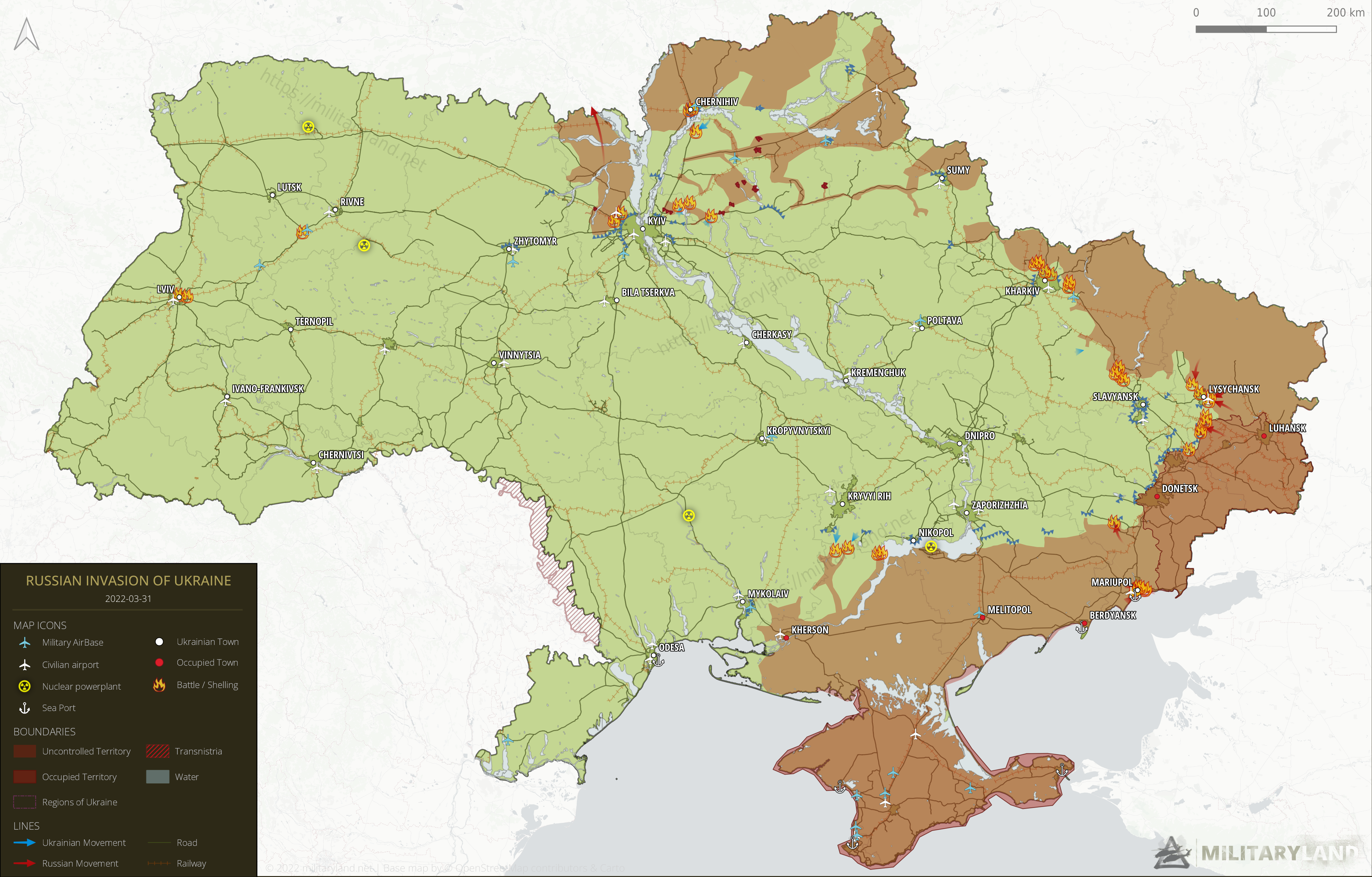 I am almost certain the Ukrainians on the contact line in the Donbass are absolutely going to be encircled in the near future. The pull back in the Kiev region is just a repositioning of Troops and when Mariupol is finished the out look is not good for the Eastern Ukrainian forces. Just being realistic. As of today the Ukrainians have admitted Izium is completely in the control of the Russians.

So you are saying, if I understand completely, that units which failed and suffered high casualty numbers, will now be reformed and successful in the area where Ukraine has held firmly for 8 years? I doubt much these units will help. Maybe fresh units that are prepared to take heavy casualties, because I fear that is what will be needed.

It all depends on ukr tactics. As we see russizt are going to attack anyway, so they will take much larger casualities. Let us keep in mind that the elite Russian forces suffered a great deal of loss and there are reserves that are coming from ukr west.

I’m interested to know what options with respect to tactics you’re refering to here. The only tactic available now is to sit in static defences and fire on assaulting tanks and infantry until ammunition and/or rations are expended. The trouble with static defence is those strong points can all be eliminated with indirect fire or air assault once identified. This is a case of world war 1 defence against modern combined arms offence (This is not trolling, it’s an observation). I realise there are a lot of natural resources in Donetsk and Lugansk that you’d like to keep, but rather than wasting the flower of Ukrainian manhood on a last stand, it would be wiser to withdraw the 60k soldiers who are or were posted in the western Donbass in preparation for invasion of the ‘baby twins’ in March to a line of natural defence, say along the Dneiper River before their positions become untenable, assuming such redeployment is even still an option.

Ukraine forces tried to evacuate top Azov Commanders from Mariupol in the Mi-8 not wounded soldiers. Deputy Azov Commander Lieutenant Svyatoslav Palamar (callsign Kalina) was killed in the helicopter. They also prevented the evacuation of Azov Commander Denis Prokopenko and Commander of the 36th Marine Brigade of the Armed Forces of Ukraine (AFU) Volodymyr Baranyuk from Mariupol.

Not true. That’s russizm propaganda. There were wounded soldiers and evacuation was done not the first time, it means there were times that it was succeeded. Steel balls on ukr side.

Love the maps, you have vastly improved them a lot.

We tend to get a lot of daily updates as to how the war progresses, with focus on Russian strategy, however, there seems to be little to no analysis as to how Ukraine has prepared their defenses and how they operated during the war.
Is it possible you could be making a post of such kind?

Maybe after the war? But I guess there will be a LOT of books, publications and movies about how the Ukraine defend so good!

Do you really think that Russia relies on the intel of some US-military blog? Thats kinda dumb ngl.

– The media loss of interest begins – with lots of attention now being diverted to domestic inflation.

– Russia has abandoned Hostomel, Chernobyl and lots of towns in Chernihiv oblast.

– Russia Defence Minister Sergei Shoigu has said the focus is now on Donbass – so it makes sense to make these withdrawals.

– Russia has increased shelling in Kyiv and Chernihiv oblast to protect the withdrawing troops.

– Russian army is in disorganisation: “Our brigade really sh*t themselves… There are casualties, there are many wounded… The whole army here is stupid, simply morons. We should not f**king be here… We cannot carry out missions against such an enemy.” (https://www.pravda.com.ua/eng/news/2022/03/31/7336022/)

– Russia has massively misjudged this invasion. However, me must be diplomatic with them if we are to reach ceasefire and peace settlements.

Today was crazy! UA has cut off RU troops in Bohdanivka and most likely other areas near there. There are close to 16 BTG’s in that area. 8 from the 90th TD and 8 from the 2nd GRMD. If they are all cut off… wowzers!

Looks like in the Chernihiv oblast, from Nova Basan to a little before Monastyryshche has been reclaimed by Ukraine.

Ruskies will pull back from northern and upper east, realizing it’s no use to attack anymore. However what worries me is once they take Mariupol, they will rush heavy reinforcements and weapons in those areas to have that corridor from donetsk to crimea. If Ukraine manages to free Mariupol, this would be a big win for Ukraine.

no reason they couldn’t just drive around Mariupol in the first place. Not like that city is anything more than a dirt road with a maybe functional port.

A railroad that might be unusable
leading to a port possibly with no cranes.

Mariupol is a complete pyrrhic victory. Unescicary bloodshed just so putin can say he won something

Mariupol is the largest city in Donestk PR still occupied by Ukraine and since possession is 9/10ths of the law, when some kind of negotiated peace is finally acheived then a complete Dontesk PR will more likely be conceded by Kiev if it is fully occupied; thus the capture of Mariopul is presently a main objective. No matter how much anyone here wants it, the Ukrainian army, what’s left of the Azov Regiment and who ever else is lurking in the Azovstal works* are in no position to relieve the city.
*I say this because, having already shot a Tochka at one of Azov’s headquarters a couple of weeks ago, I fail to see why the Ukrainian army aviation would waste so many of it’s few remaining helo’s trying to evacuate senior leaders of Azov out of the city, nor why Macron is suddenly so adamant that France be allowed to conduct a ‘humanitarian evacuation’. Something doesn’t smell right to my enquiring mind; is it roast beef, l’escargot or apple pie?
In addition, once rehabilitated in the aftermath, Mariupol is home to one of the largest steel works in the country and is a significant port on the Azov Sea, and those assets will become part of the RF once Donetsk votes to assession to the Russian Federation.
Kidding yourself that Mariupol is just a dirt road with maybe a functional port is quite delusional.
Once Mariupol and the remaining territory of Donetsk and Lugansk are reclaimed, the next focal point will be Nikolayev and then Odessa. No one really cares about Kiev, the activities there succeeded in tying down a large Ukrainian force that has not been able to interfere with ops in the east and which now can’t redeploy east or south without risking air-interdiction with extreme prejudice while en-route.

So for you, russia fascists, is better to get city that is doomed and there is nothing left, than to live peacefully? True russcism. And why do you talk about the names dnr, lnr coined in Putin’s wet dreams? Hello, russict troll.

Still occupied by Ukraine? Putin is it you?