It’s been a month since the Russian invasion of Ukraine has begun. Iconically, it marks the first day when Ukrainian troops reported more successful operations than the invading force. 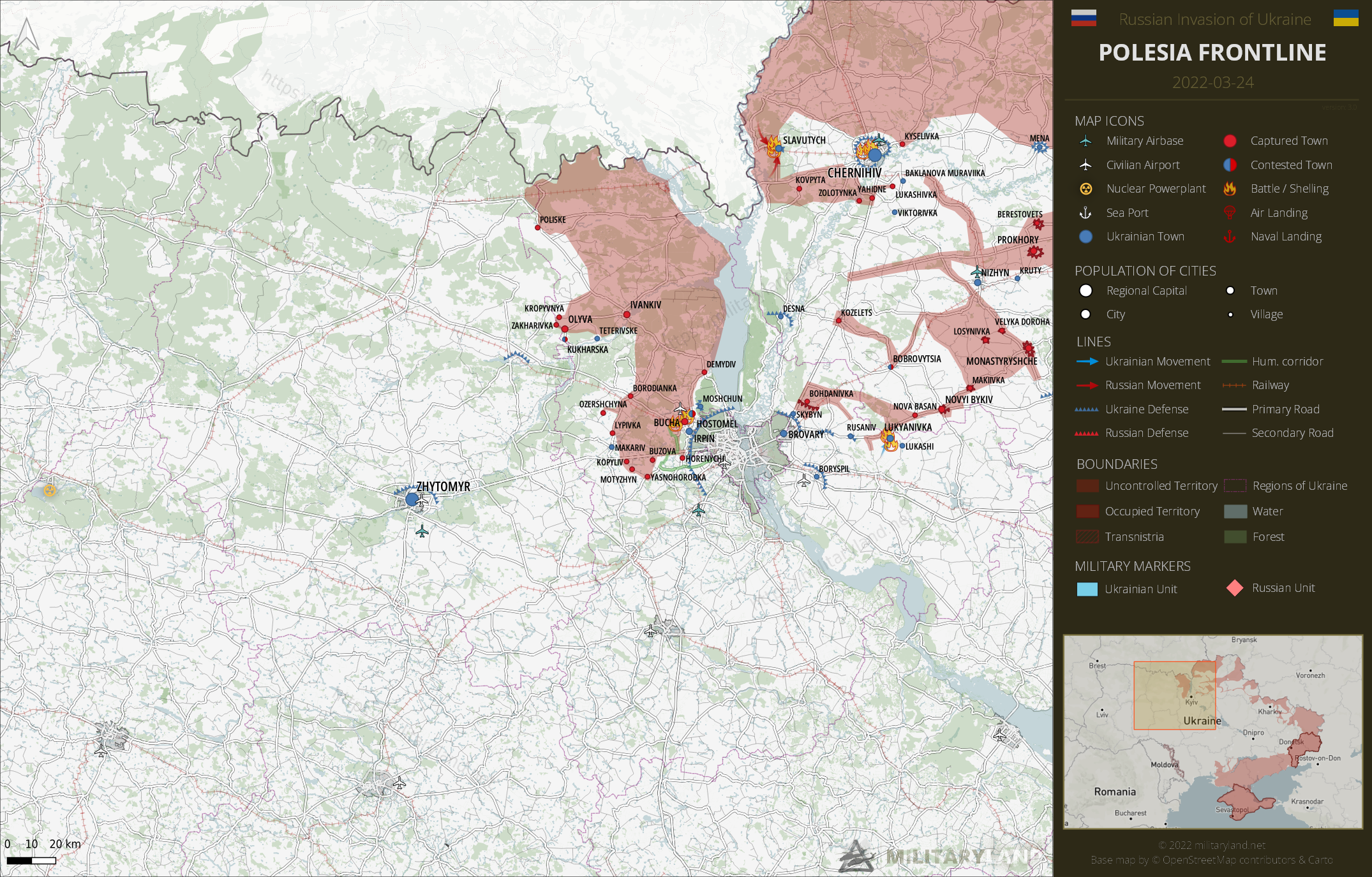 Ukrainian forces launched an offensive operation in the west and liberated Lukyanivka and Lukashi. During the operation, Ukrainian troops captured and destroyed a number of Russian tanks. 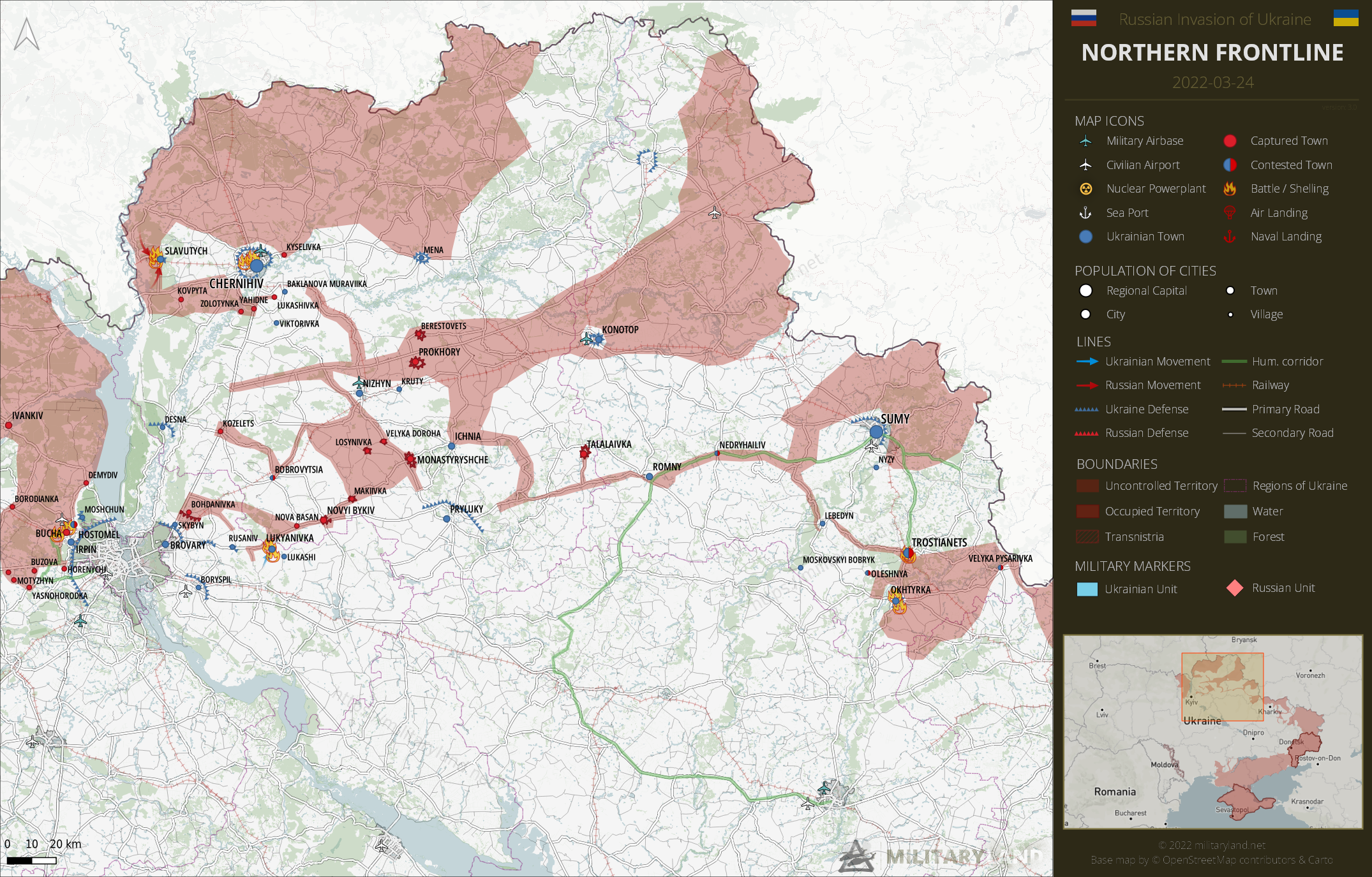 Russian troops, for the first time since the beginning of the invasion, attacked Ukrainian checkpoints at Slavutych. Ukrainian troops reportedly repulsed the attack, but the outlook doesn’t look promising. The city is too far from Chernihiv.

Russian troops shelled Okhtyrka again, the town is practically non-existing. The fierce battle of Trostyanets has continued on Thursday. Several buildings are on fire, but the local firefighters cannot get there due to ongoing fighting. 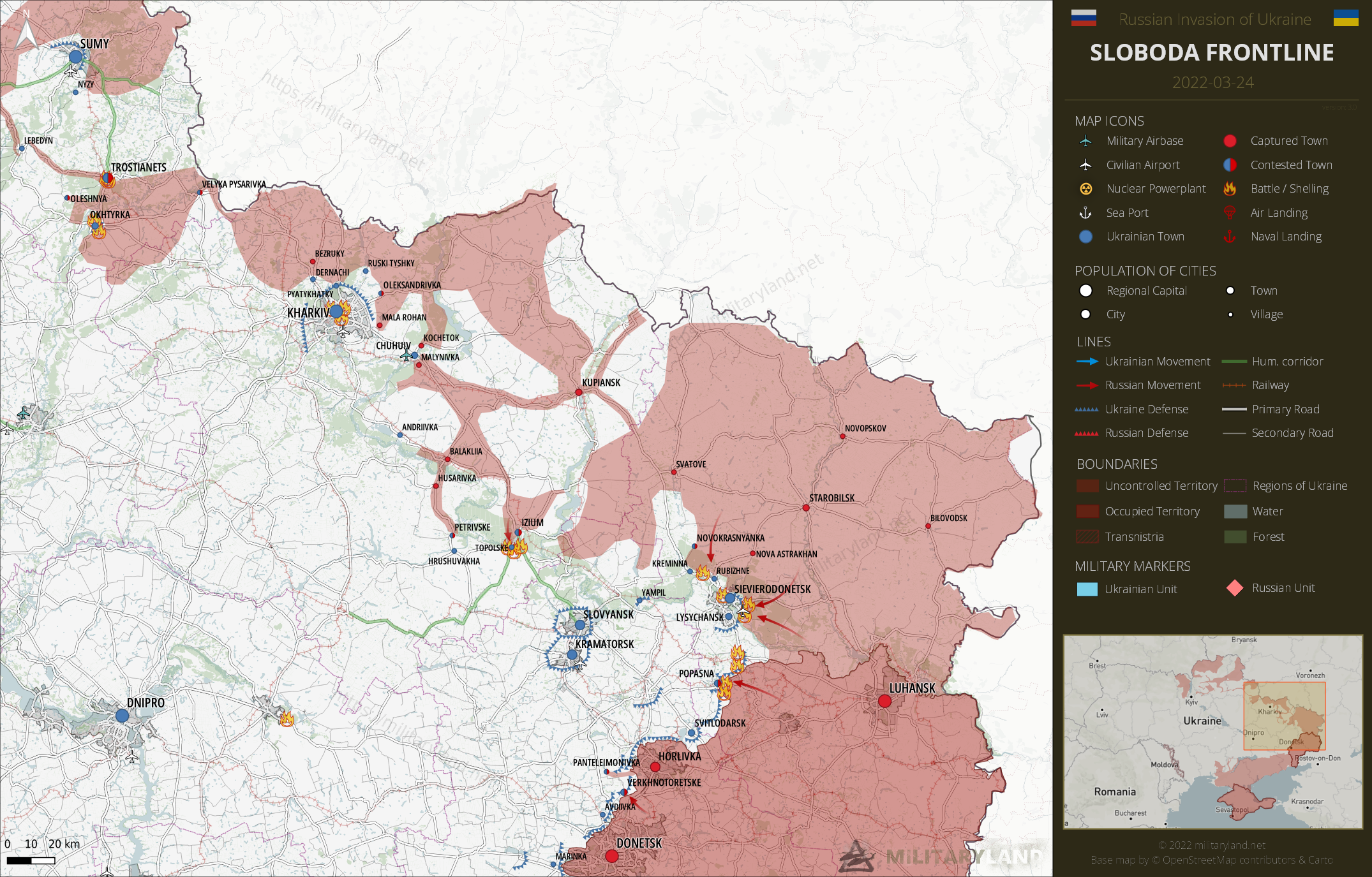 Ukrainian forces denied Russian claims about the loss of Izium, they reportedly still control the south of the city. Russian troops seem to given up on Kharkiv and just continue to cause irreversible damage to the regional capital.

Russian forces struct Sievierodonetsk and Rubizhne today, killing at least five civilians. The fierce fighting continued in Popasna, with no success for the Russian attackers. 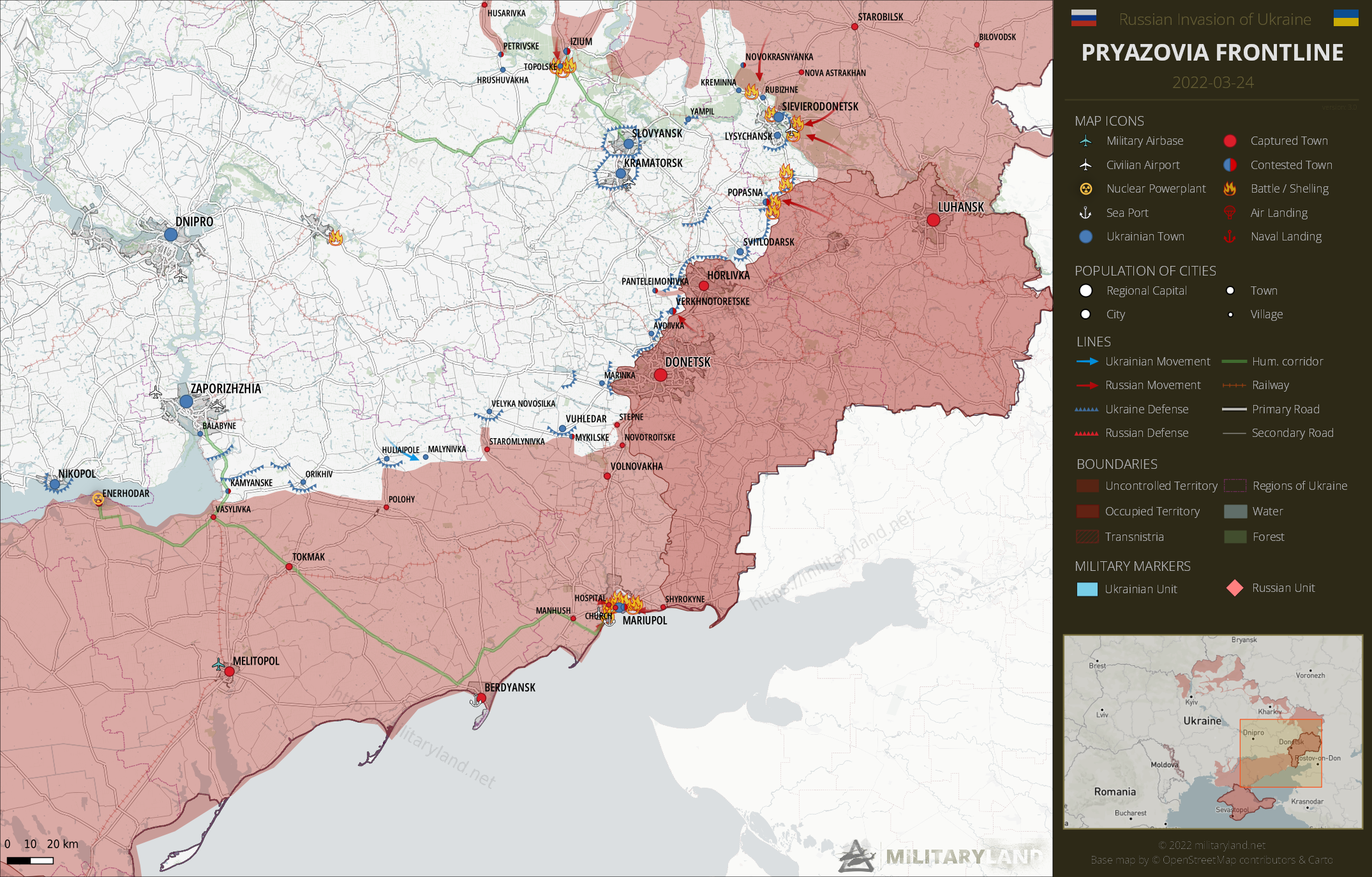 Ukrainian elements attacked Malynivka from Huliaipole. The operation was successful and Ukrainian troops are now in control of the village. 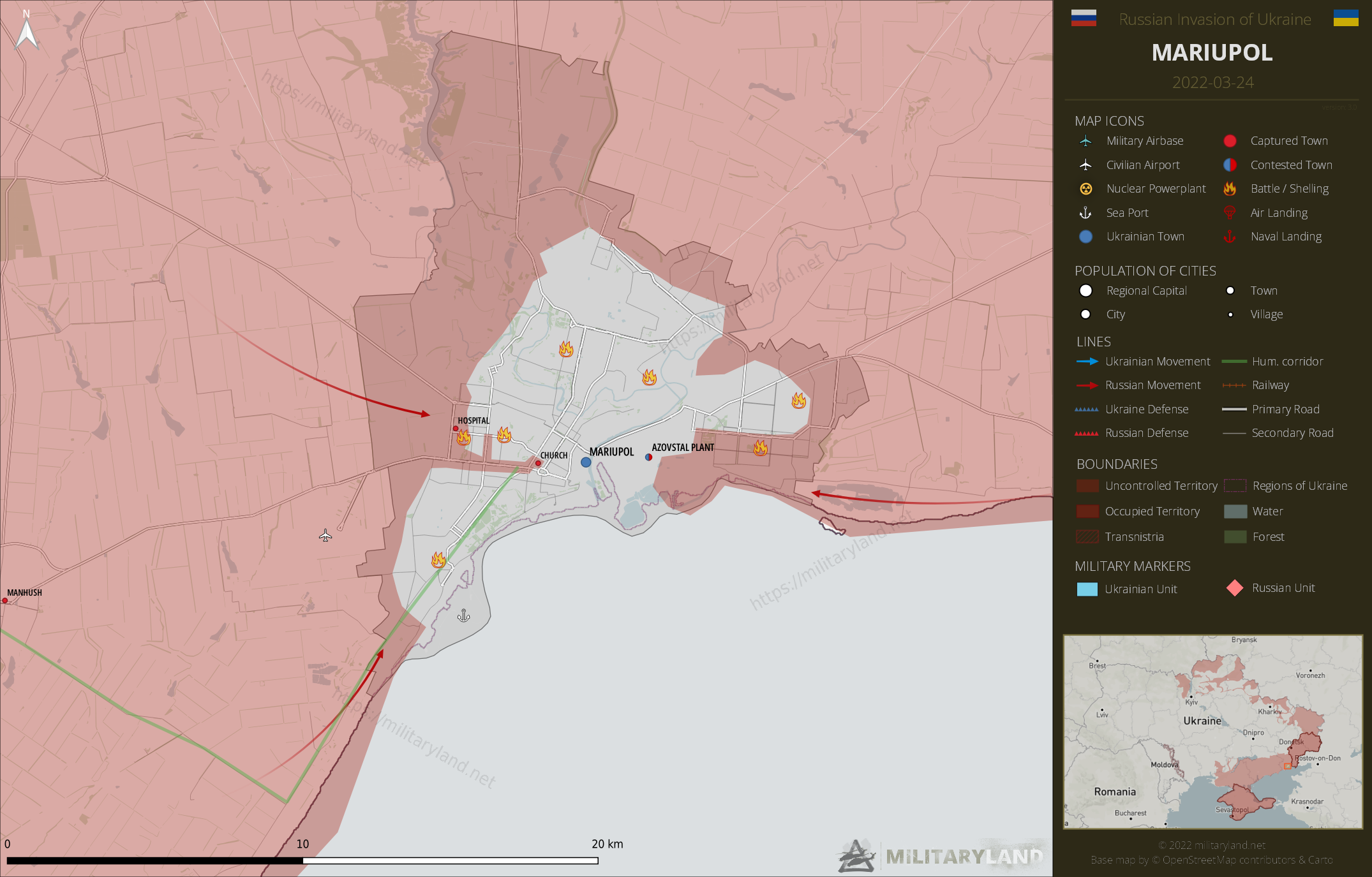 Russian forces reached the Church of the Intercession in the center of Mariupol. Azovstal plant remains contested. The area under Ukrainian control is slowly shrinking. 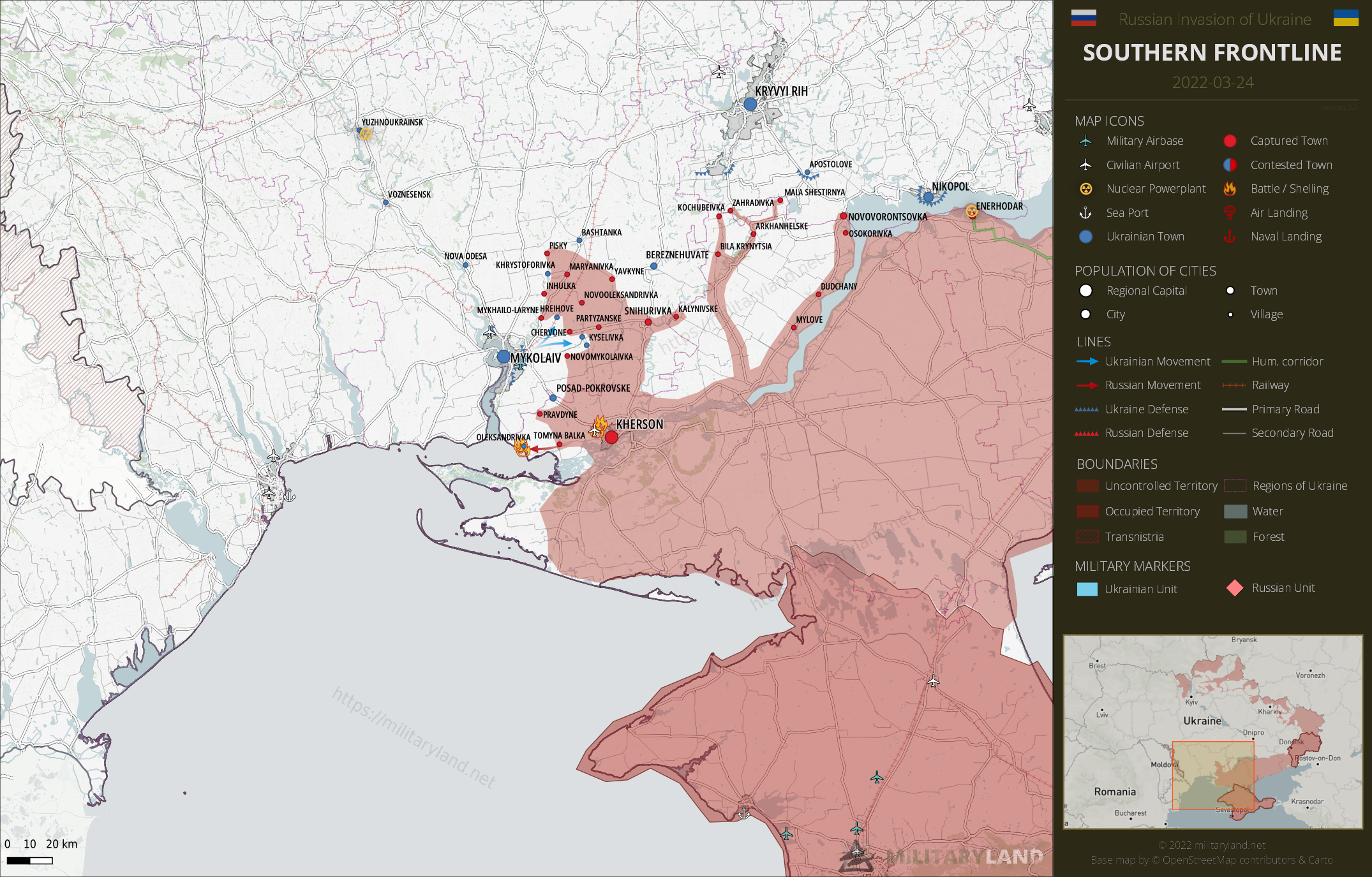 There are unverified claims that Ukrainian forces reversed all Russian gains in Mykolaiv Oblast and pushed them back to Kherson Oblast. I’ll not rush the judgement and wait a day for clarification, just to be sure.

Ukrainian artillery shelled Chornobaivka area in the evening, most likely the airfield nearby. Russian artillery, on the other hand, hit Oleksandrivka in the south and caused vast damage to residential buildings. 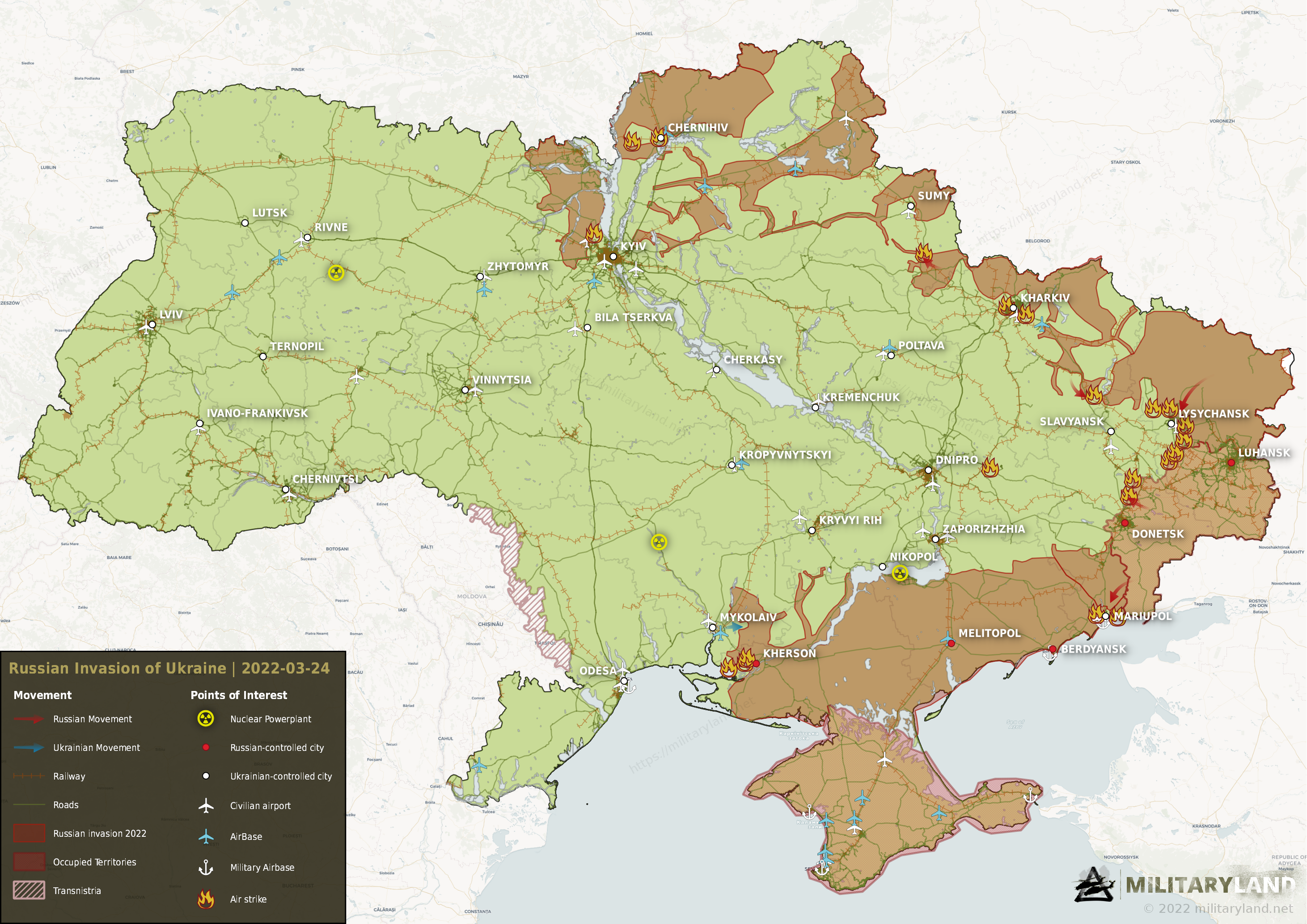 It seams that Semenivka (Chernihiv region) is not under Russian army control.
https://t.me/suspilnechernihiv/7643

Small innacuracy in the legend of the full map: white anchor icon labelled as ‘Military airbase’. Should be port or naval base imho.

Thanks. I’ll fix it for the next update.

Somehow every ukrainian attacking and defensive action is successful, while every russian attack is a complete failure, yet the ukrainian controlled areas are shrinking day by day. I’d suggest to go and find better sources. 🙂

You better check those maps again. The only thing that’s shrinking is in your pants.

Reality. From?
Reply to  REALITY

Is it? Which country are you being this intelligent from?

REALITY
Reply to  Reality. From?

From the Kyivan colony formerly known as Kursk, of course!

Really though, if you feel like there are relevant information sources not being acknowledged, why don’t you share them with the rest of us?

Do you really want to find reality online? Grow up.
Reply to  REALITY

Then you must had the chance too to talk to those who escaped this terrible war, right? Like me, who lives near to the ukrainian border, where we accommodate thousands of refugees. These people (unfortunately) are pretty good sources, don’t you think?

So random war refugees are your source for claiming “the ukrainian controlled areas are shrinking day by day”? I wonder how they can possibly figure that out…
Shouldn’t we rely more on things like satelite images or actual video evidence from the front lines?

Also, the Ukrainian army, unlike the Russian, never suffers any losses apperently.

They have losses, but just not as big as the Russians. It’s easier to defend than to attack.

The entire history of wars says otherwise, but even if this is the case for Ukraine in 2022, not reporting any losses on one side means that the report is somewhat subjective. Nobody knows what the current losses are (apart from the military commands and they – naturally – don’t talk much about it), all the numbers that we see are estimates.
Here’s an interesting article https://smoothiex12.blogspot.com/2022/03/i-know-it-hurts-but.html. Quick summary – if the loss ratios are even close to what is reported by the Western media, the Ukrainian Army is more effective than one of the best armies of the 20th century which was led by Manstein, one of the greatest tacticians. Begs the question why are they losing ground then?

Of course the UA army is suffering way more losses than what is reported. However, there is an information embargo on Ukrainian losses and since we don’t really get much comprehensive information from the other side, it is very difficult to gauge.

Also, apart from Mariupol, where exactly is UA losing ground? What is your source for this?

The Institute of War (ISW) wouldn’t agree with you: https://www.understandingwar.org/backgrounder/russian-offensive-campaign-assessment-march-24. Their map is very similar to the one Jerome posts here, the maps on here just have more detail.

C’mon now. An institute that marks twitter as a reliable source? It’s just as biased as russia today.

I think that’s the 10th time Russians have occupied that airfield north of Kherson. It’s suicidal. UA artillery has that airfield on speed dial at this point. What are they trying to hit with those helicopters that they can’t hit from the airfield next to Kherson?

Thanks. Is there any evidence regarding Izium, one way or the other?

Video filmed from the portion of the city that the Ukrainians claim to control. Domed church in the background I located on Google maps matchs what is on the video. The only problem I see is the video does not show who is recording nor does it show Russian Troops

Here is the link to the video

It is Russian clip,guy which recorded it said,”finnaly”…but Russians already said that they capture it it was very important strategic point..

Here is the name of the church

The ship in Berdyansk was hit by a Tochka, not a TB2.

One of the videos shows other vessels laving the area. One of those nclude three small patrol type vessels, moving out to sea at speed line astern some distance from the port. The video zoomed on them.

Any way they could have rocketed the port? Other ships reported being struck.