The map didn’t change much today. Russian forces continue to shell all regional capitals, but the army didn’t make any progress. Russian missiles hit Yavoriv in the morning, killing 35 people. Yavoriv hosts the International Center for Peacekeeping and Security. 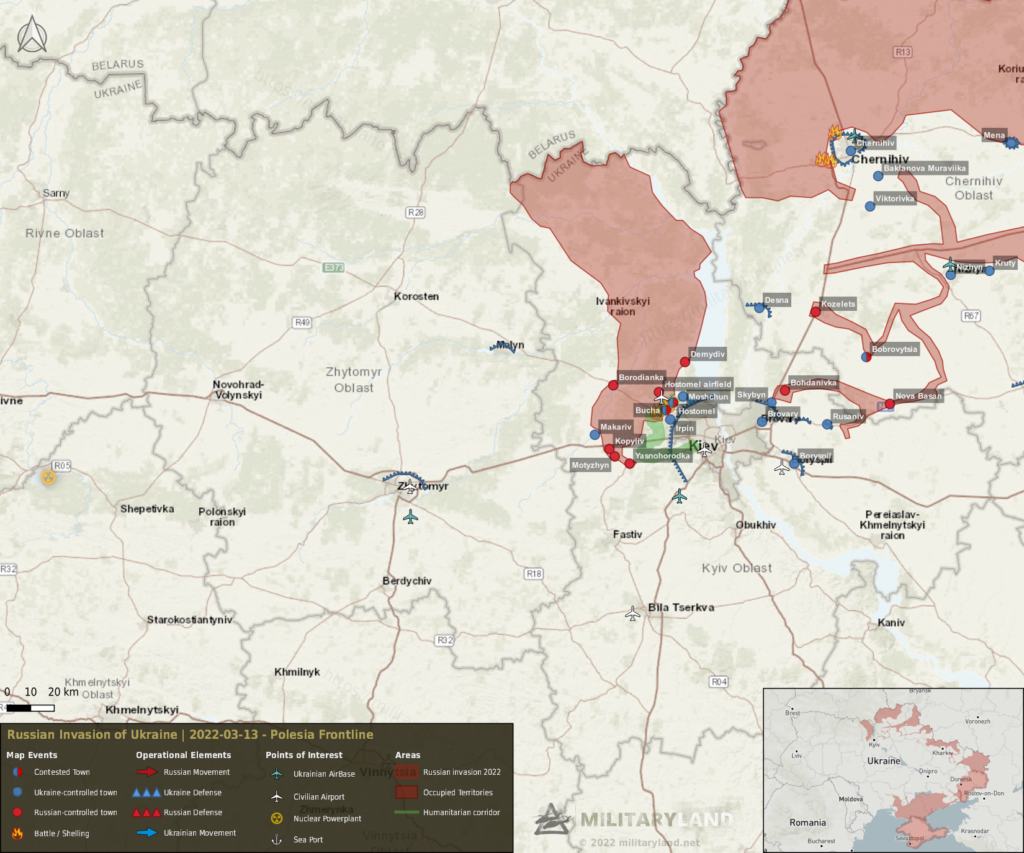 Ukrianian forces conduced a counter-attack north of Kyiv and captured a settlement of Moshchun. Russian forces haven’t yet launched an attack on Kyiv, nor made any progress to the south. A complicated situation is in the east near Brovary, but Ukrainian forces are continuing to hold on.

Ukrainian authorities stated there is a threat of sabotages, main targets are military facilities and key infrastructure such as bridges. 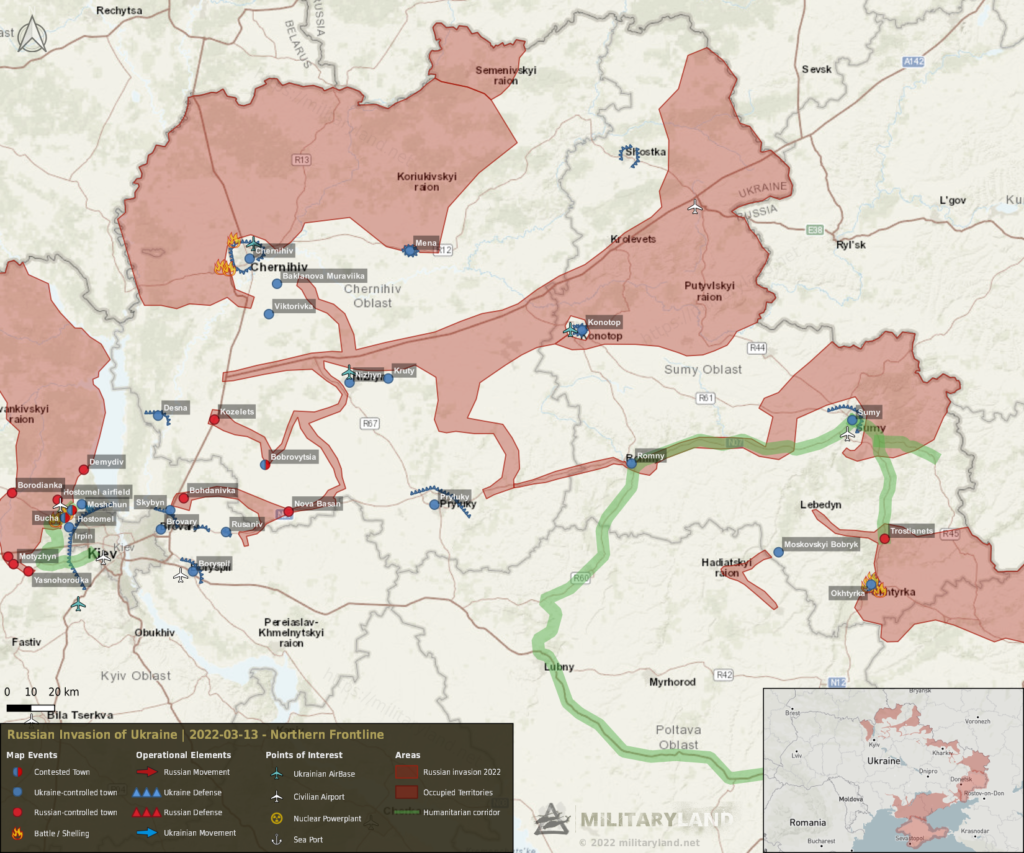 Russian forces continue to shell the city of Chernihiv. There’s been no change on the ground.

Russian forces shelled Okhtyrka, destroying a power substation and power plant. There is no heating in the town. 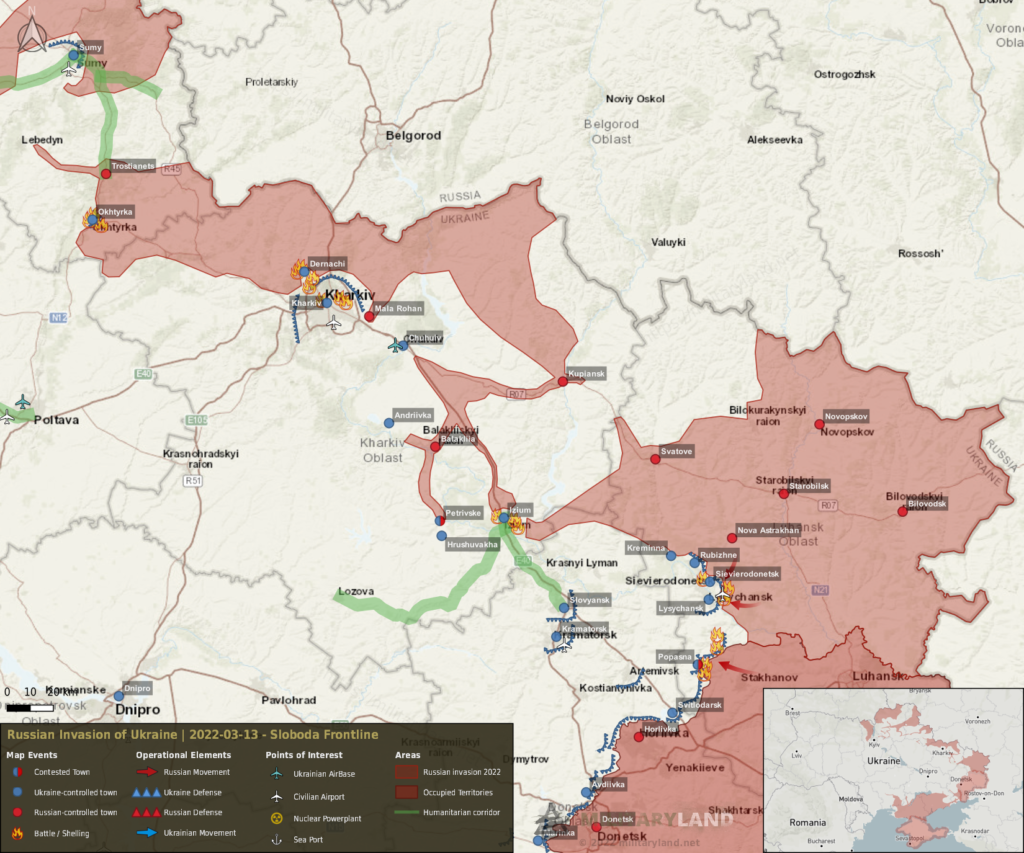 Russian forces continue to shell the city of Kharkiv and Izium. There’s been no change on the ground. Ukrainian anti-air defense systems downed a Russian jet in Kharkiv region today.

Heavy shelling of Ukrainian positions in Popasna, Zolote, Rubizhne and Sievierodonetsk was reported. There’s been no change on the ground. 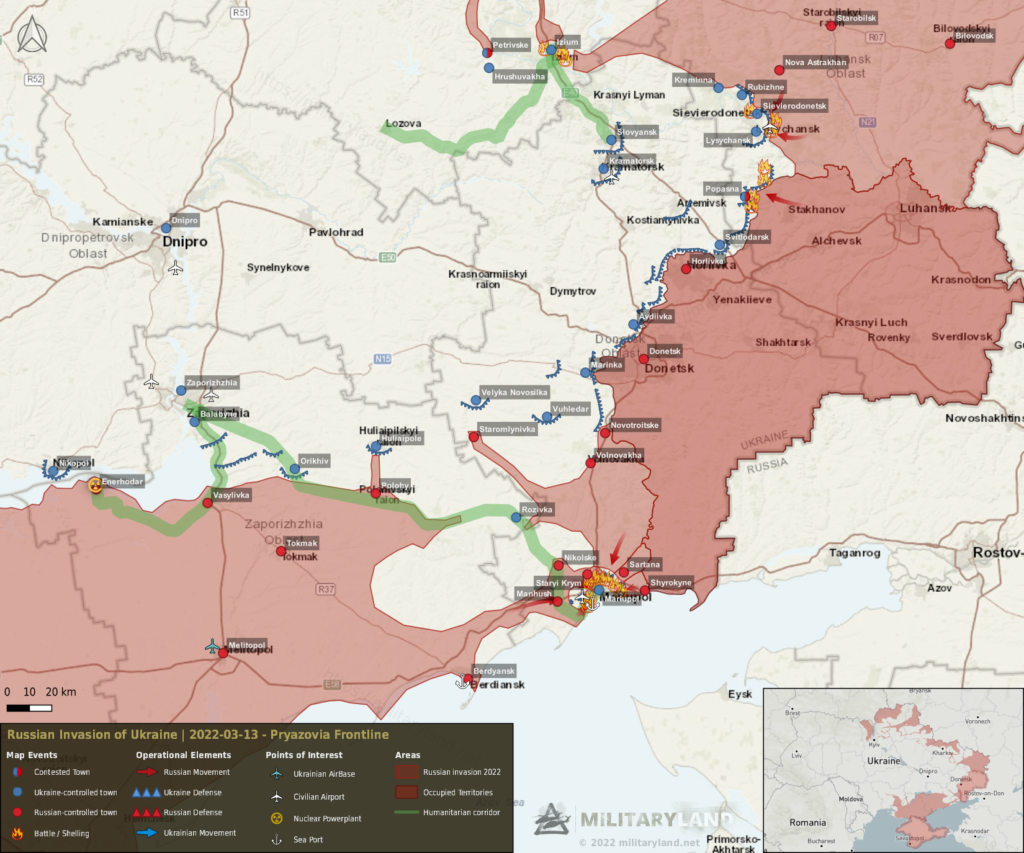 Russian forces are pushing towards Vuhledar. The exact location of the Russian spearheading force is unknown. Fighting has also been reported from Marinka, Avdiivka and Svitlodarsk. Ukrainian forces are firmly holding the defense line. 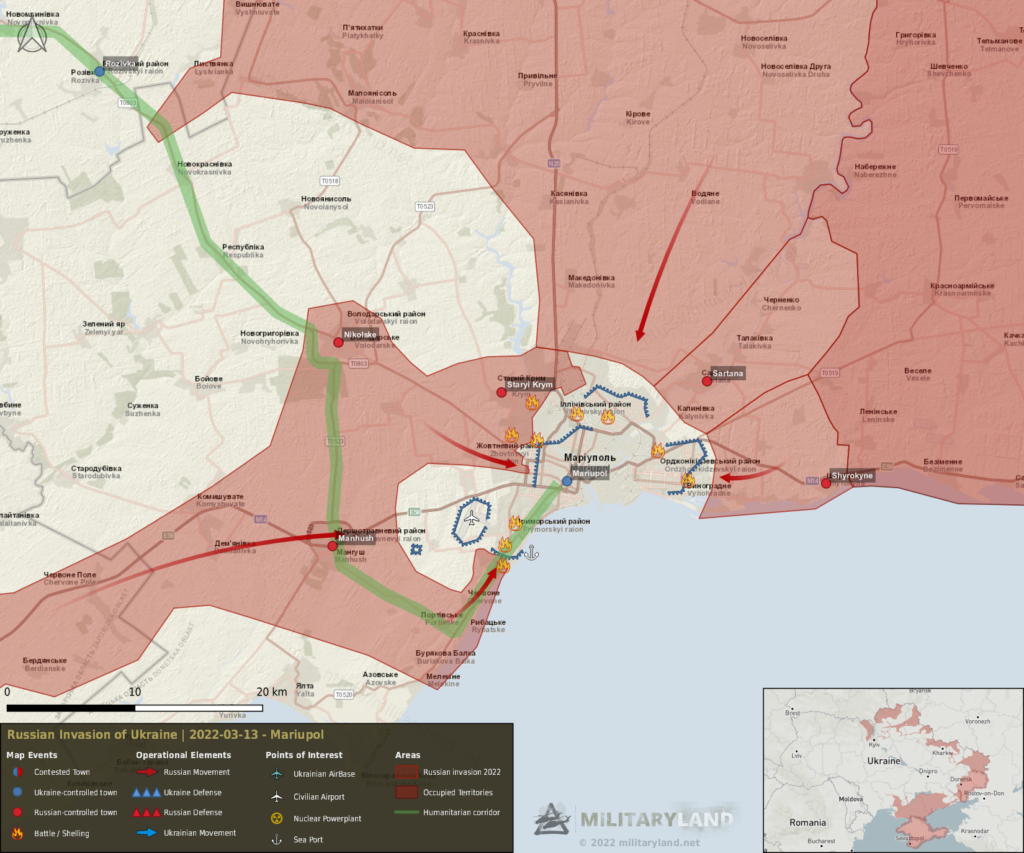 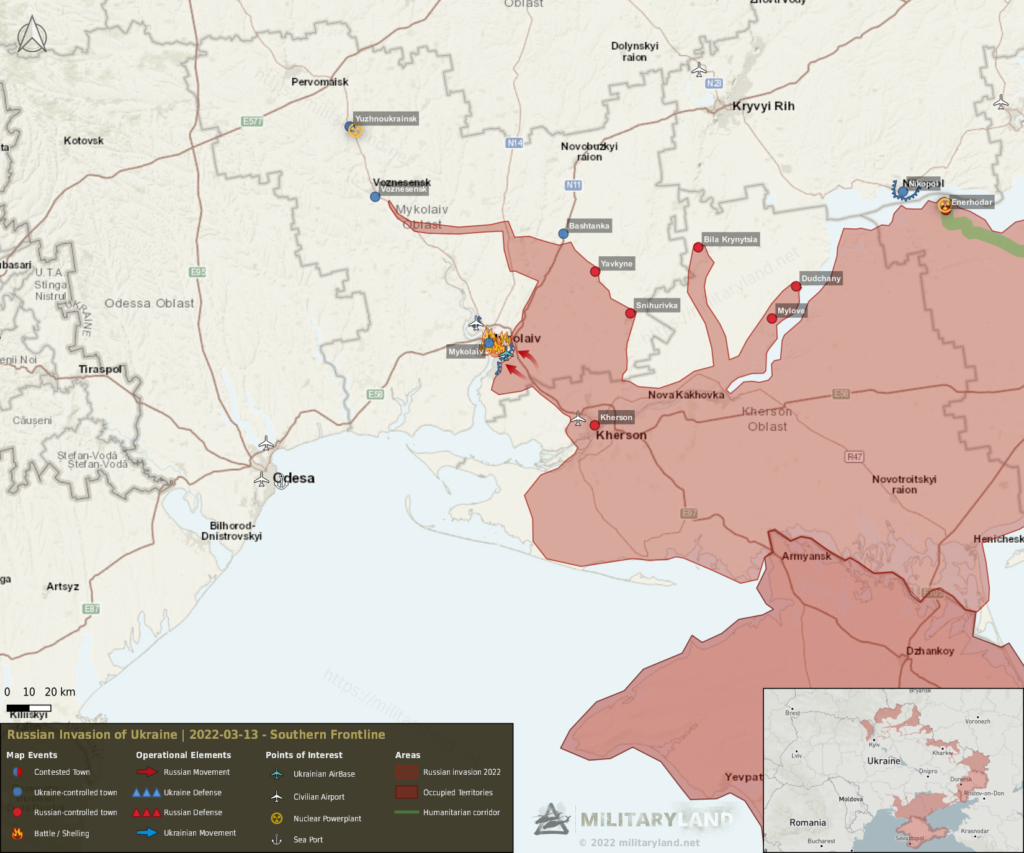 The city was shelled from the east and north-east. There’s been no change on the ground. 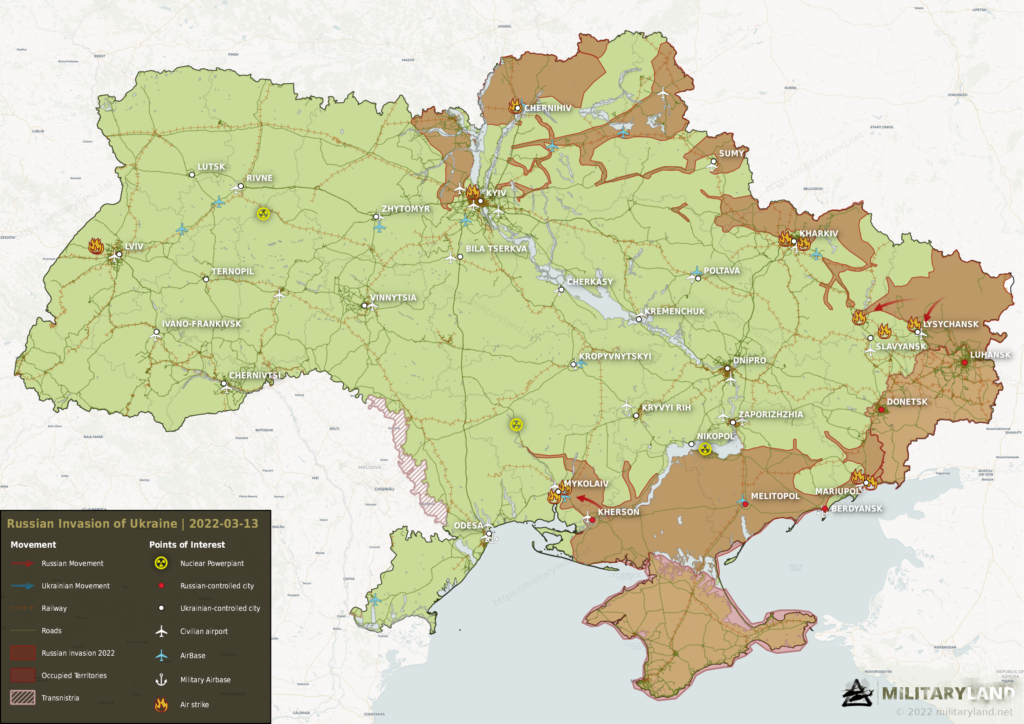