Russian army focuses on breaking through Ukrainian lines in the vicinity of Avdiivka and Pisky at all costs, but so far is unable to advance deeper into Ukrainian controlled territory, and has only minor gains. Russians have more success in the area of Bakhmut, where the troops are approaching the outskirts from the south and east.

Ukrainian forces successfully repelled most of the attacks on their positions in the last 48 hours. 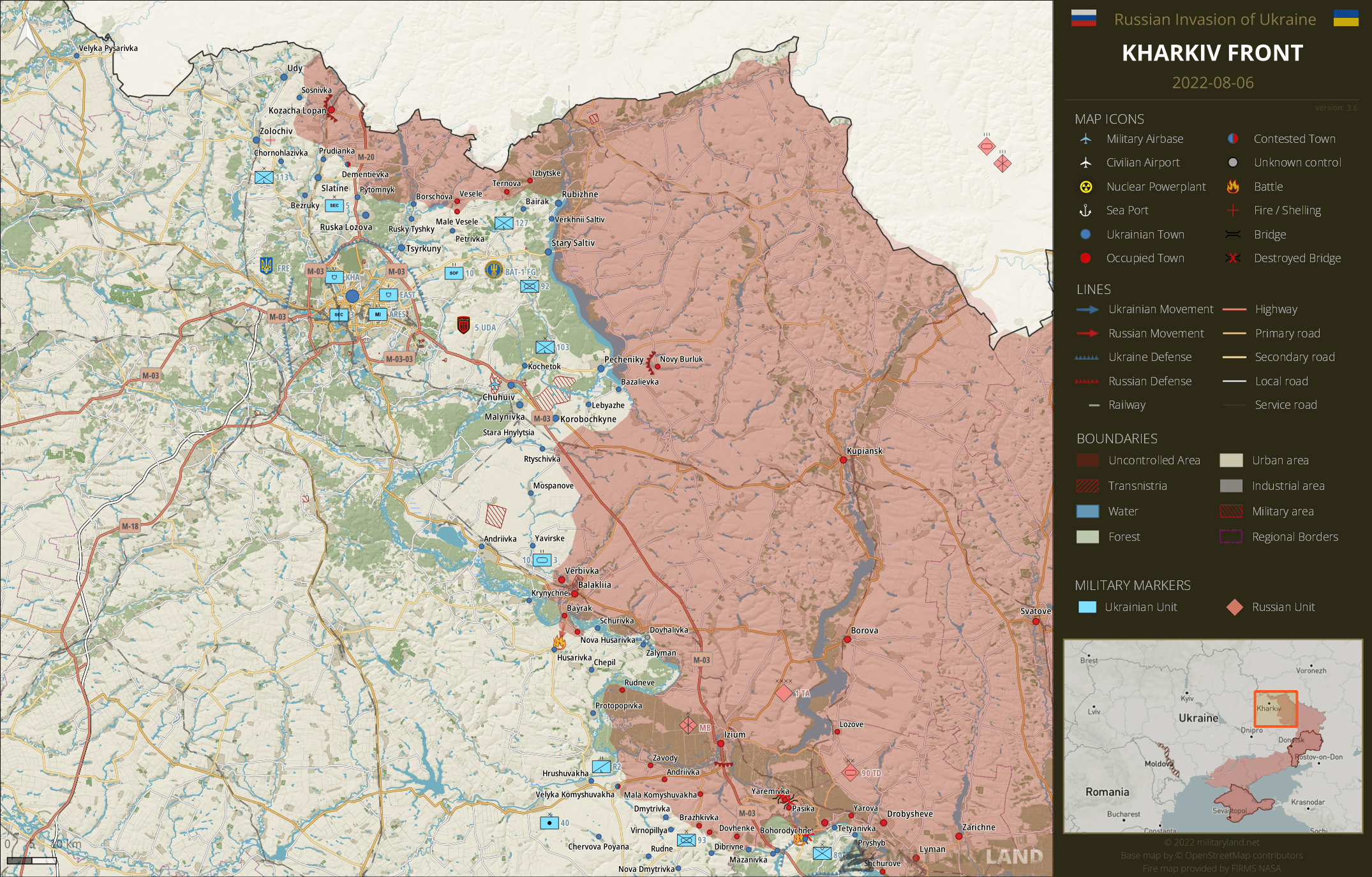 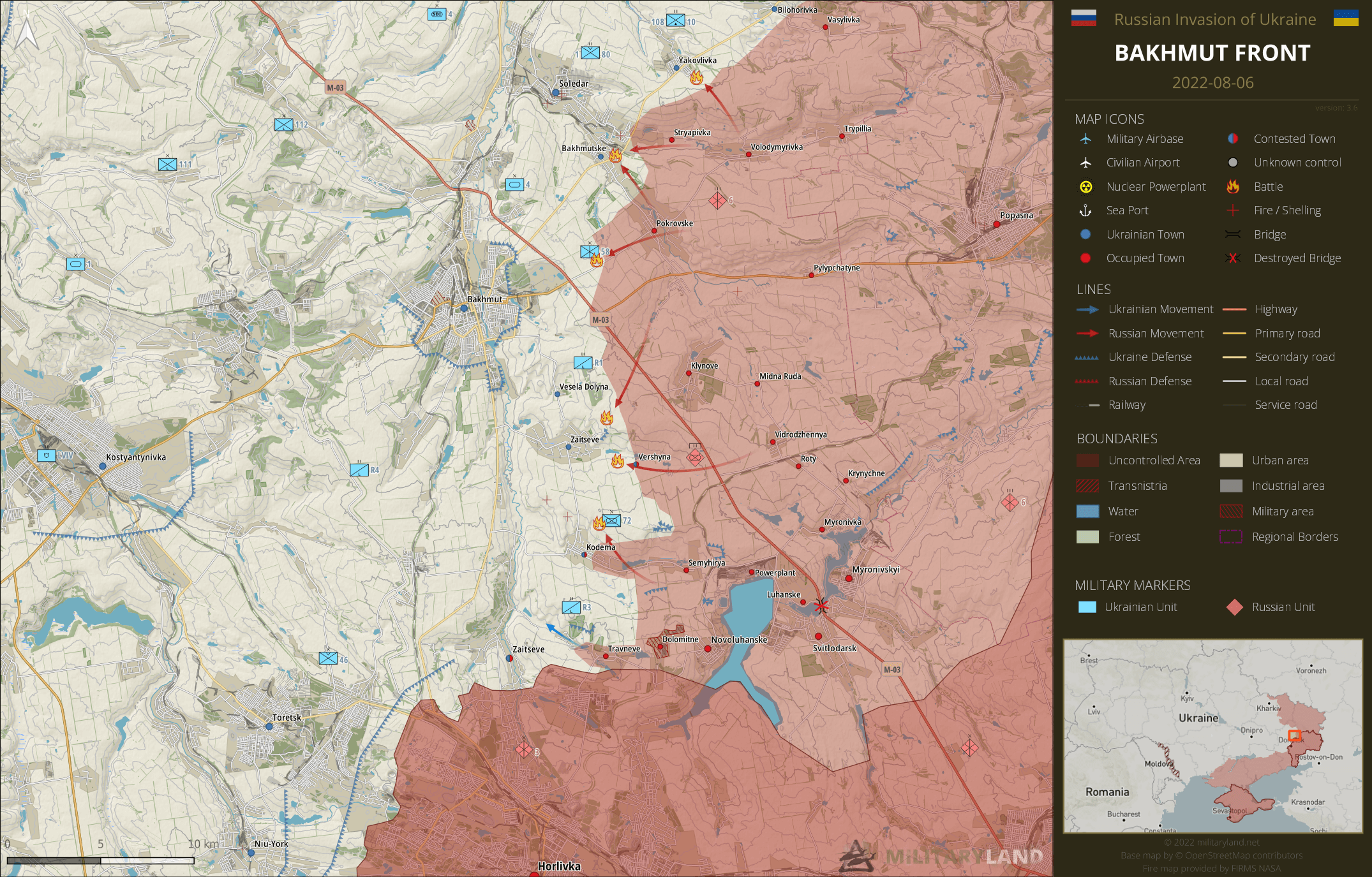 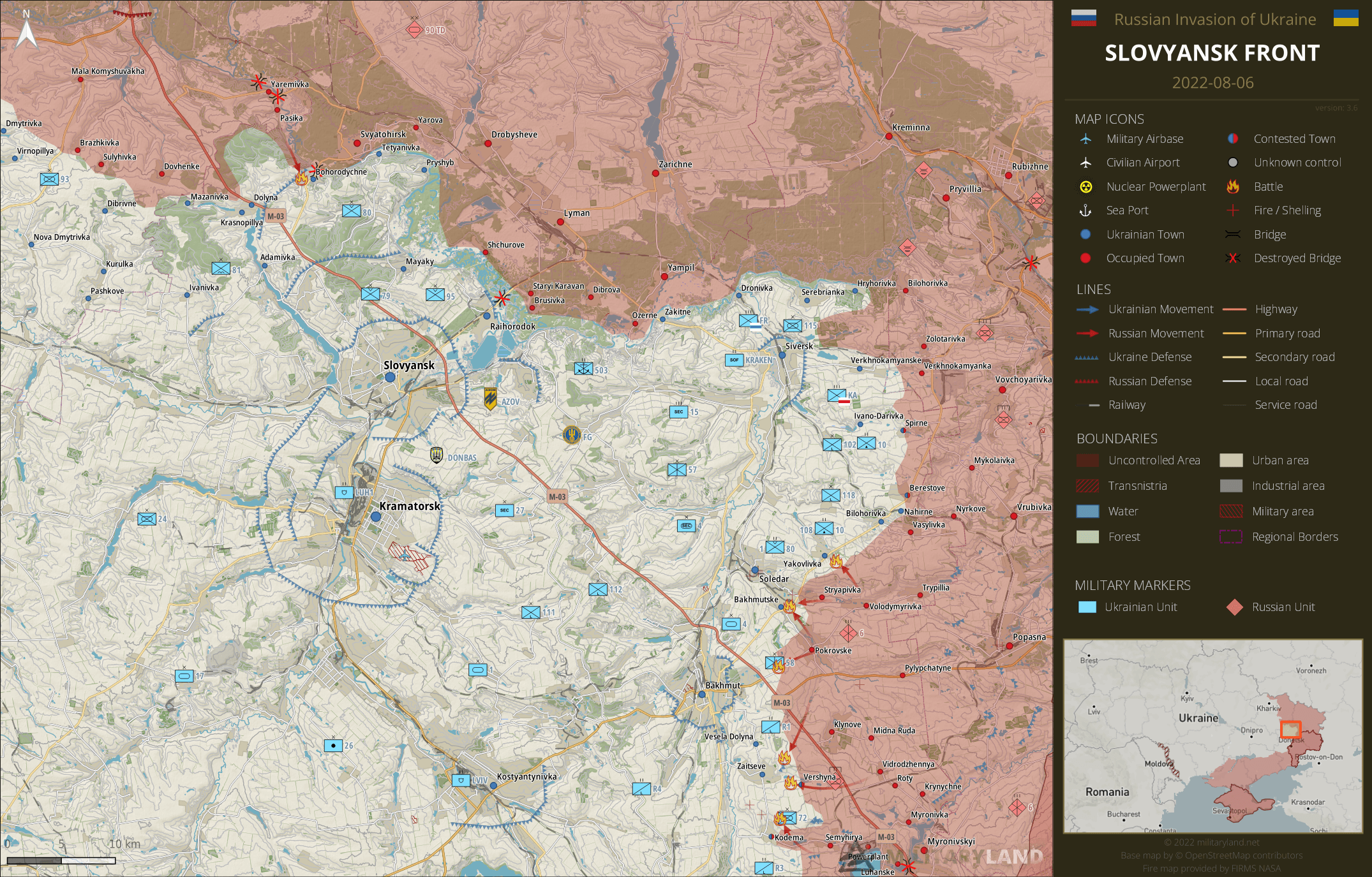 Note: As there is no solid confirmation that Russian troops are located in Bohorodychne and Ukrainian General Staff reported a repelled attack on the western outskirts, it seems Russians are no longer in control of the settlement. 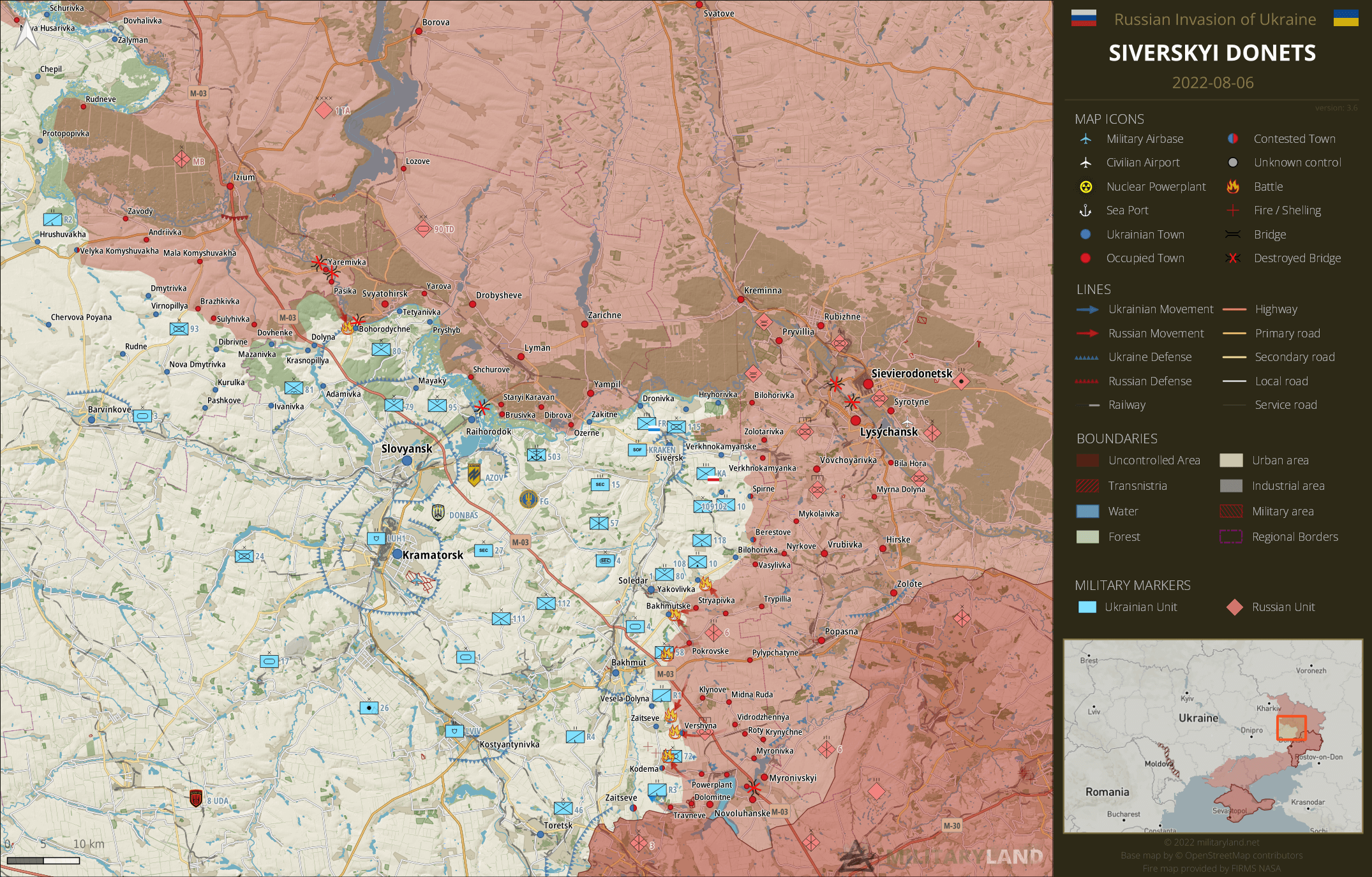 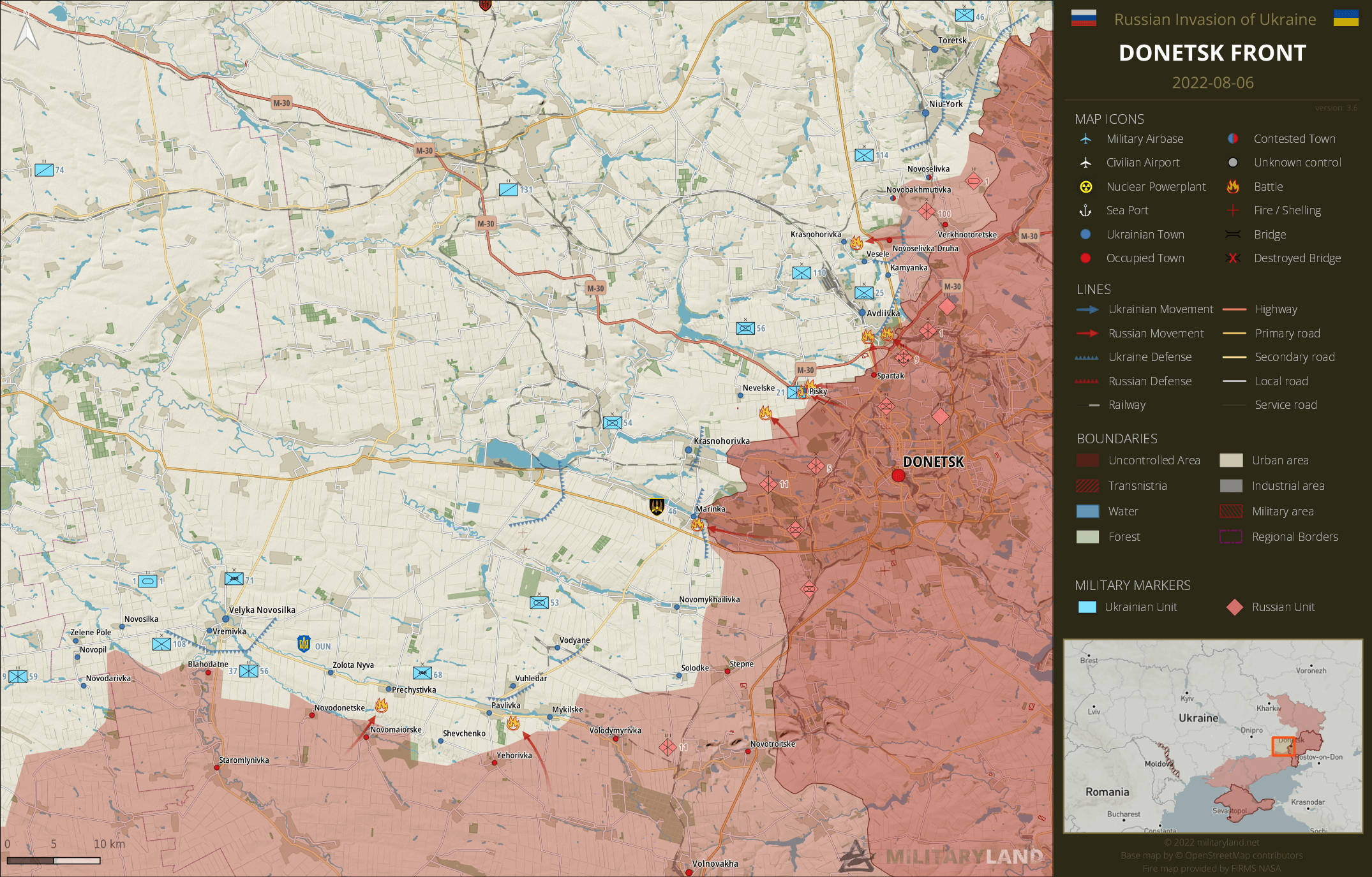 Note: The recent report by Ukrainian General Staff clarifies of who is in control of Novomaiorske. It seems Russian troops captured the settlement a while ago. 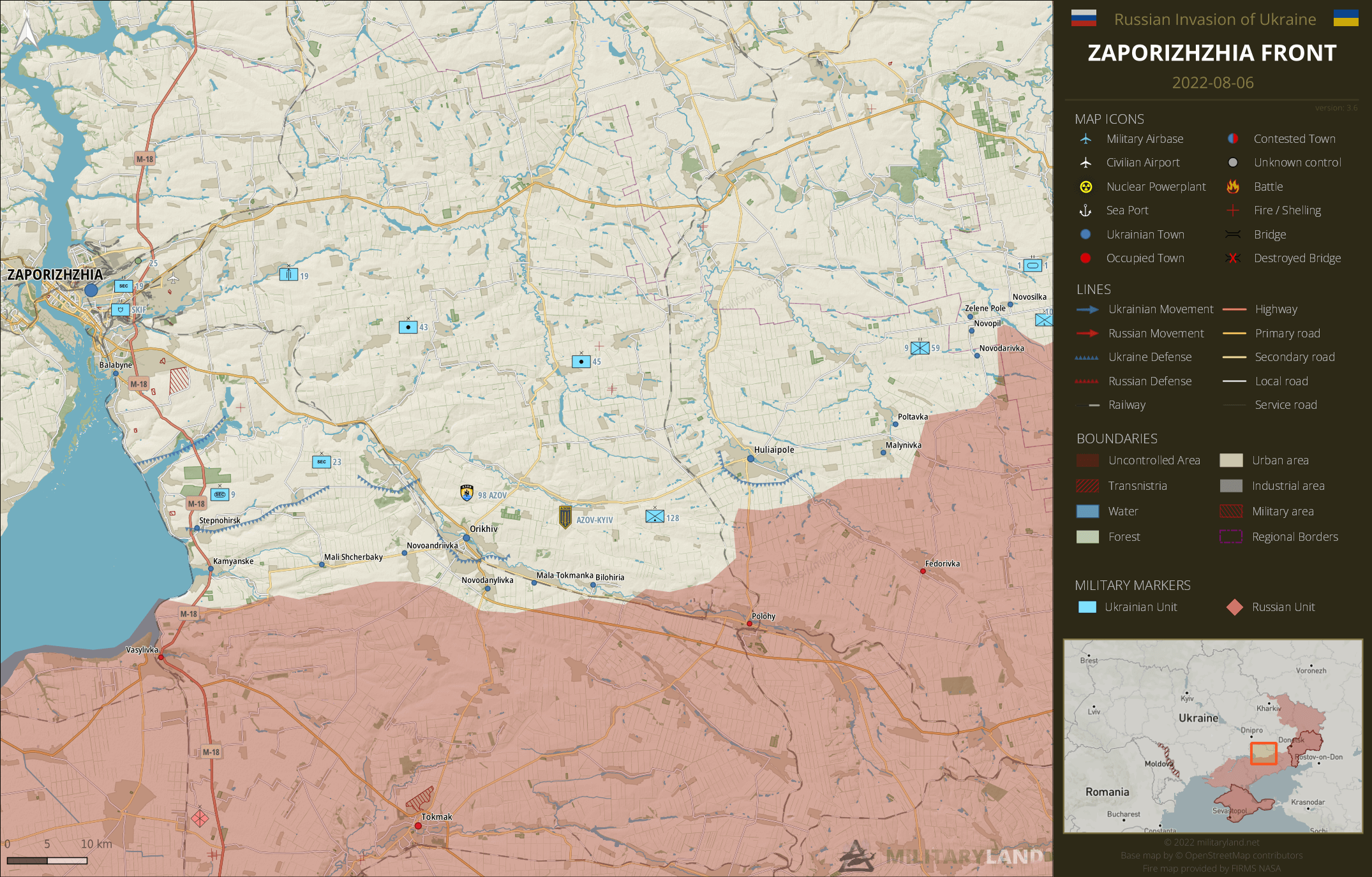 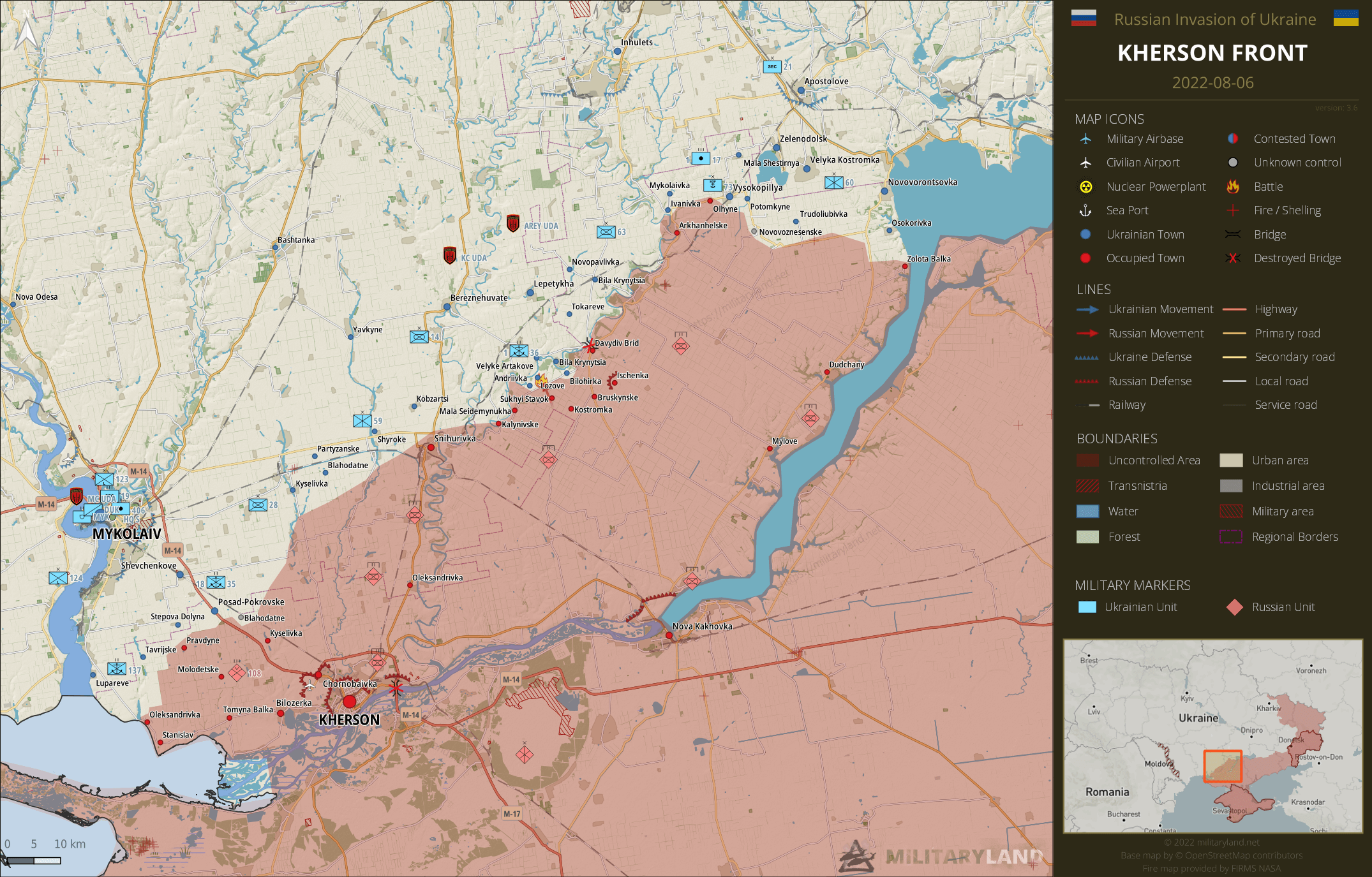 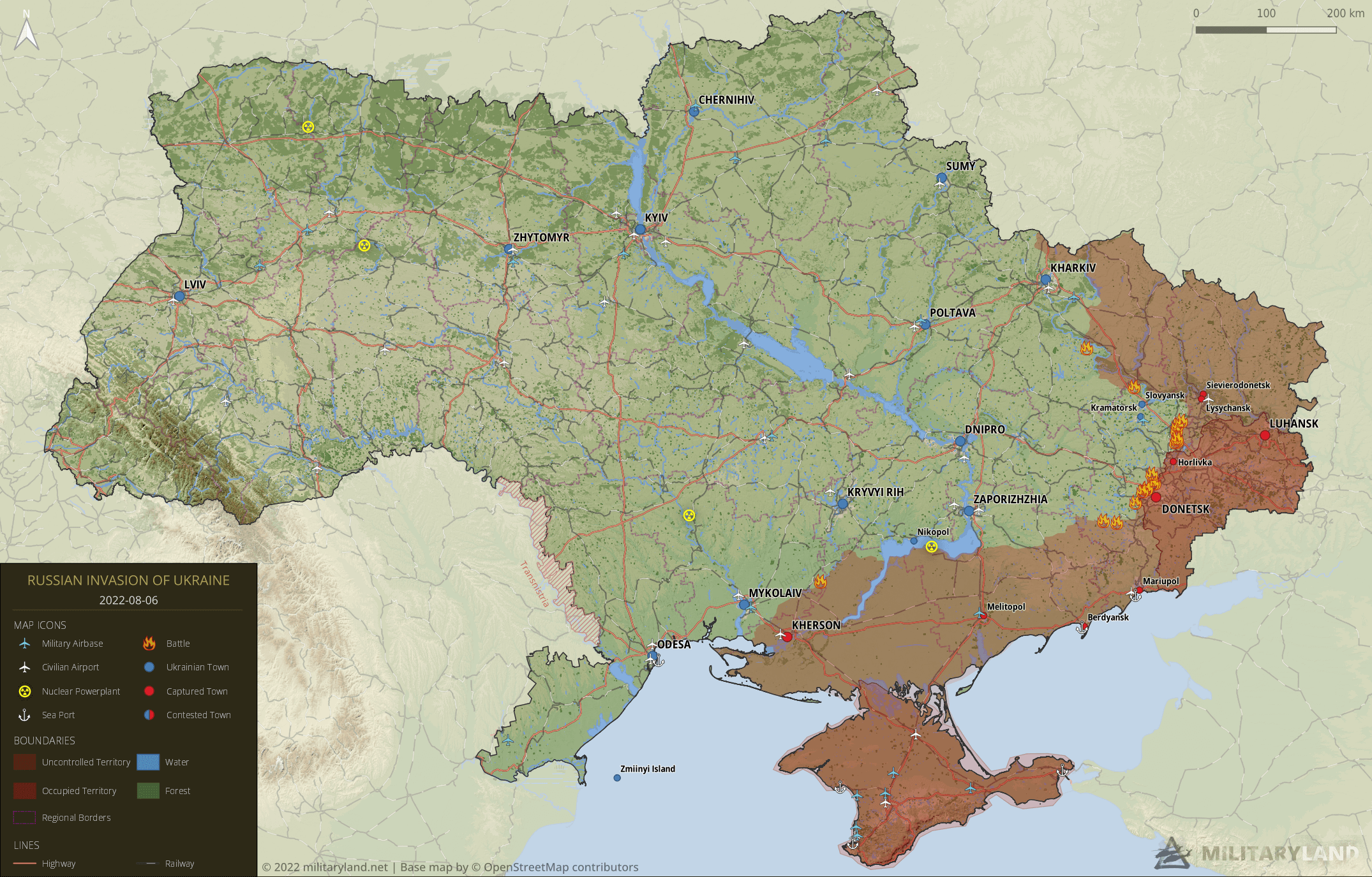 As always! Soon yhe best position will be Dnestr River.

Cannot say otherwise when you see a Russian video from Travneve and there is literally nothing, no equipment, no dead soldiers.

Ukrainian command learned some lessons from 2014/2015.

@jerome 300 caracter is very short. Maybe 400 is a better compromise.

If you check our map (or theirs), Russia controls the area in between. It sounds logical they attacked from there.

An interesting map to the russian BTG in ukrain (of course its an estimation). Nb: probably all btg are not complete or at egal quality.

If true,
Next battle defensive or offensive clearly in south.

And if true, russia clearly abandon the capture of slaviansk/kramatorsk.

Why did you decide that the Ukrainian forces retreated from Kodema?

I quick-fixed it to contested. They’re indeed not in full control.

Frontline stabelized, oil price wti below 90, russian economy in big trouble, grain shipment picking up and western air defense systems coming next. On top it looks like ukraine can shift the focus in direction kherson. Winter is coming for russia.

And winter equipment magically will appear, right?
(they did not have it in reasonable amount, hence so many frostbites, when they started in Feb, sic!). Winter means also more breakdowns, unlike popular beliefs RU equipment is not ‘winter-proof’ by design.

I don’t know if RU economy is in such big trouble. So far least, it has shown impressive resilience: https://www.russiamatters.org/blog/crippling-sanctions-russias-economy-afloat-now

Modern states are complicated and resilient beasts,they do not die in a few months. If someone expected that RU will collapse in a short time- that was a delusion. RU will survive ofc (until something drastic and unexpected happens) but won’t thrive and a war is a costly bussiness. At the moment – they went into deficit (for the 1st time since rebound in early 2k) and it won’t gonna better.

2/2
expect a lot of “sanction does not work” narrative exactly *because* they are started to bite.

i know that this is impossible to tell, but does someone know with how many soldiers russia makes it’s attacks? like we just see ukraine has repulsed all attacks and it sounds impressive, but if it were only like 10 guys probing the defensives with no intention to capture it.. like yeah no shot

My guess would be 20+ soldiers with armored support.

I guess it depends on which part of the front is attacked. BTW, it is still unclear to me how many soldiers RU has in UA. I have seen vastly diverging estimates ranging from 90,000 to 200,000 (without the DPR/LPR forces).

It’s not many, otherwise total losses across all fronts would be way more than 200 per day.

A lot of accounts states that the tactical level of engagements dropped drasticly. While at the start RuAF would deploy company and above elements during the operations, this dropped to the platoon or even effective squad level (~10-30) around a month ago. There is also much more SOF operations.

is possible to know who is manning the frontline for the russians? Is the DPR/ LPR? it’s said that the russian are relocating a lot of btgs in the south, is this happenning?

Please, may you elaborate this further? Do you mean general mobilization? Personally I would think, that GM would come close to an admission of failure.

tactical-operational-strategical: can ukraine 1. stall the russians 2a win back the coast 2b win back crimea (manpower + attack equipment) -> bound russia 0 in its old borders – in desperation kiew may attack (on) russian soil with nato equipment -> russian regular mobilization .. Kaliningrad

Clearly, Putin went all in – economically, politically, personally. In foreign affairs and internally. To me it would not come at odds that an dictator at risk instead orderes a highly risky military manoeuvre in avoiding its failure. War is politics…

They could… but they didnt do it.

Actually ukrain is in total mobilisation and not russia .

Strategic plan (his official version)was put on the table 4 month ago. Since yet all happens like announced ( and probably better). But its only now that hard things will begin.

Total mobilisation in UA is a joke. Have you seen Kiev? Men are enjoying sun and restaurants. I reaaly dont get it. RU has max 200k soldiers lets say that to beat them UA would need 400k. So either they have and they dont want to fight either 40 bilion nation cant mobilise 400k. Both cases are bad.

You have right on one things. With around 1 000 k , ukrain is not really in full mobilisation.

So what they are waiting for. My feeling is that they dont care about donbas and kherson exactly like they didnt care about crimea. remember like russians came there and took wihout one bullet? and whole units joined them. it really looks like putin has a bit right that some of them want to be in Ru

Here is the war of artillery. Ukraine still doesn’t have enough of it. Of course it’s possible to mobilize millions, but what for? To put all of them with AK against tanks and cannons? It’s not a video game where you can teach many units for one step. Who will fund all these troops?

If you are interested, just search on YouTube the video “Сиреневый парк”. It’s about how locals were shoot by Russians. And you will see how it is to attack tanks with nothing.

Yeah, the numbers just don’t add up. Either Reznikov is lying that they have 1 million mobilized, OR they’re trained in theory but don’t have weapons so not in troop count, OR they are ready to go and just waiting orders, meaning they’re not confident they can take on 100k+ Russians with just 1 mil.

They are on their 4 stage of mobilisation. The 2 first are Probably train (some of them probably have the time to follow specialist training).Some of them was engage in dombass. The third probably close to finish his initial training . The rest still training.

‘1mln mobilised’ is probably a propaganda’roundup’.though the number is realistic for such population(in full total war economy they could go for 3 mln easily even more in ‘barrelscrap’ mode). Assume 1/4 in the field/training and the rest in support roles (in US standard ratio would bemorelike 1/6).

I’m interested in your comment about RF being able to equip 6 times the current forces in Ukraine. The current forces do not have advanced tanks, logistics is a mess, they don’t even have NVGs. How is this a modern army?

Before this war, russia was (in theory)able to mobilise, train and equip a very big defensiv army in less than 6 month . With soviet material of course.

But now, the military who was plan to form this army are on the frontline.

Copy. It seems like throwing soldiers from either side on the front lines is destined to fail without artillery, air power and enough people to occupy and defend said frontline. I’d guess for the Ukrainian side they’re just getting the right type of artie and the RF lost momentum

2 camp have lot of art. RF have more canon/bm21.Ukr have better gunners (8 years of wars) and now better artillery (155mm and himars. Not a lot. )

Ukrain have the mass to cover all the frontline. Not RF.

But we dont see ukr in massiv atk. Bigger was 1k in karkiv

No, they can hardly maintain the combat capability of already deployed units.
This is evidenced by the redeployment of troops from far east and the transfer of obsolete equipment. The strategic initiative also consists in imposing the battlefield on the enemy, and Ukraine is doing this.